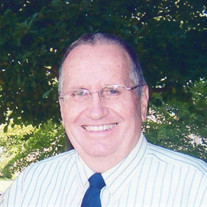 Richard Frank Wilson 1941-2016 Richard Frank Wilson, 75, passed away due to complications of amyloidosis on July 17, 2016, surrounded by his loving family. He was born in Spanish Fork, Utah, on January 20, 1941, to Frank Everett and Lois Powell Wilson. Richard graduated from Springville High School and was very proud to be a member of the esteemed A Capella Choir. He served as a missionary for the LDS Church in the West Central States Mission and served in the Army National Guard. He was a graduate of BYU and later in life he received his teaching certificate in special education from the University of Utah. He married Ella Morrill on May 2, 1963, in the Manti LDS Temple. Together, they raised 5 boys of whom he was very proud. He lived in Lehi for over thirty years and most recently in Mapleton. He was successful in many careers, including as a teacher at Dan Peterson School in American Fork, and as a loan specialist/appraiser for the Federal Housing Administration. He was also an entrepreneur starting his own hydroseeding business, and owning and operating Springville Floral and Gift for 14 years. Richard loved spending time with his family and they frequently took road trips together. Throughout his life he was able to visit 49 states. He loved music, reading, gardening, fishing, pheasant hunting and was very handy at fixing cars and completing home improvement projects. He loved life and always said he wanted to live forever. He is survived by his wife, Ella, of Springville; sons Gary (Ellen), David (Holly), Jim (Steve), Brian (Tracie), Michael (Cynthia); his brother Lynn (Leslie); 13 grandchildren with another due in October and 2 great grand-children. He was preceded in death by his parents and daughter-in-law, Janeen Norman Wilson. Funeral services will be 12:00 Noon, Saturday, July 23, 2016 at the Mapleton 3rd Ward Chapel, 970 North 400 East, Mapleton, UT with viewings at the church Friday from 6:00 to 8:00 pm and Saturday prior to services from 10:45 to 11:45 a.m. Interment at the Spanish Fork City Cemetery.

Richard Frank Wilson 1941-2016 Richard Frank Wilson, 75, passed away due to complications of amyloidosis on July 17, 2016, surrounded by his loving family. He was born in Spanish Fork, Utah, on January 20, 1941, to Frank Everett and Lois... View Obituary & Service Information

The family of Richard Frank Wilson created this Life Tributes page to make it easy to share your memories.