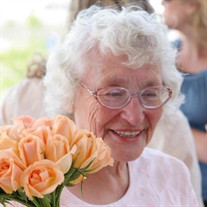 On Sunday, September 20, 2020, Rita Mae (Taylor) Farish, beloved wife, mother of seven, grandmother and great-grandmother passed away at the age of 88 in Sandy, Utah. Rita Mae was born on December 28, 1931 in Consumers, Utah to Ruby Theora Seeley and William Melvin Taylor. She had three sisters and grew up and enjoyed a wonderful childhood in Castle Gate, Utah. Rita was an honor student when she attended Castle Gate elementary school, Helper Jr. High and Carbon Senior High and Carbon College in Price, Utah. Rita married Merlin Edward Farish on April 1, 1953 in the Manti, Utah temple. They lived in Tacoma Washington for a short time while Merlin completed his United States Army service. They then moved to Torrance, California to raise their family. They loved living and raising their family in Torrance for 60 years until July 2015 when they moved to Sandy, Utah. Rita is described as sweet and kind by almost everyone she knew. She was soft-spoken and had a wonderful smile and laugh. She was not extravagant; she loved a bargain and the simple things in life. Rita worked in her early adult years as a telephone operator for the Mountain Bell Telephone Company. While raising her children, she was a stay-at-home Mom, devoted to caring for her large family and made her home a refuge from the world. Later she opened her home as a childcare business and cared for nearly 200 children over the years, including some of her grandchildren. Rita had a beautiful soprano singing voice and she loved to sing hymns and in ward choirs over the years. Many of the songs she sang to her children are now sung to grandchildren and great-grandchildren. Rita was also an accomplished seamstress, which several of her daughters and now granddaughters have followed. She loved to make quilts for the newly married in her ward. She was also a master at needlepoint and cross stitch and many other handmade, detailed crafts. Rita loved the natural world. She had many dogs, cats, birds and fish that she loved over the years. Her last pet was a beta fish that would actually let her pet it. Her children also had pets over the years that she cared for including hamsters that were always escaping, an iguana and even a tarantula. She loved to feed the birds and the squirrels that frequented her yard. Rita loved her plants and had a green thumb like her mother before her. Her back yard was a jungle of plants and flowers. Rita was preceded in death by her parents, her sister Arlene Wilstead, her son-in-law Terry Lynn Anderson and her daughter-in-law Allison Jolley Farish. She is survived by her husband of 67 years, Merlin Edward Farish; seven children: Michael William (Constance) Farish, Paula Denise Farish, Cynthia Mae Anderson, Allison Lea Vanoy, Loretta Kay (Henry) Araiza, Aaron Taylor Farish, and Larayne Cherie (Jon) Fitisemanu; 33 grandchildren and 56 great grandchildren. She is also survived by her sisters Dixie Lea (James) Richens and Rayona (John) Anderson. Rita Mae Taylor was a wonderful mother and grandmother. She was the heart of our family and her family was her priority and her greatest joy. She will be missed greatly but her memory brings inspiration and happiness to all of us. Until we meet again… A private family memorial will take place on Saturday, October 10, 2020 at 12:00 noon (Utah time). A live stream of the service will also be available on the Facebook page for Premier Funeral Services. In lieu of flowers, please consider feeding the birds or planting something in her memory.

On Sunday, September 20, 2020, Rita Mae (Taylor) Farish, beloved wife, mother of seven, grandmother and great-grandmother passed away at the age of 88 in Sandy, Utah. Rita Mae was born on December 28, 1931 in Consumers, Utah to Ruby Theora... View Obituary & Service Information

The family of Rita Mae Farish created this Life Tributes page to make it easy to share your memories.