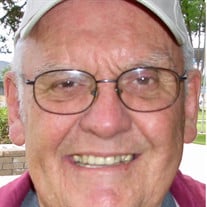 Robert (Bob) Roger Barker 1944-2017 Robert to his family members back east (Bob to his many friends out west), passed away peacefully in Salt Lake City, Utah, on March 11, 2017, at the age of 72. Robert was born on December 5, 1944, in Hoboken, New Jersey, to Eugene and Catherine Barker. Prior to relocating to SLC in 2015 for healthcare reasons, Robert was a longtime resident of Elko, Nevada, settling there circa 1970. He loved living in Elko (aka The Heart of Northeast Nevada), which had a sort of symmetry to it, since Robert had a pretty good heart himself and hailed from Northeast Jersey. For decades Robert openly shared much of the love he had in his good heart with his beloved adopted hometown by unstintingly volunteering countless hours supporting various sports programs for the youth of Elko, serving as the popular local public announcer at events. Robert was also a proud United States Navy veteran, serving aboard the USS Boxer (LPH-4) through all of 1965 and into 1966. During that time, the Boxer successfully transported and delivered 200 helicopters of the US Army’s 1st Cavalry Division to South Vietnam. This is of some note, since those same helicopters subsequently made a sizable difference in the decisive outcome of the hard fought Battle of Ia Drang for our troops, as recounted in the book We Were Soldiers Once … And Young, upon which the movie We Were Soldiers is based. Most folks that knew Robert were aware that he was a lifelong fan of the Dodger baseball team, from way back when “Dem Bums,” as they were lovingly known, played in Brooklyn, right on through their surprise move out to Los Angeles in 1958; and from then on, till the day he died. But what most folks did not know about Robert was that all the rest of his family were rabid Yankee fans. In fact, a fairly good portion of the population of Hudson County, New Jersey, just across the Hudson River from the Big Apple, where he grew up, were also Bronx Bomber fans to boot. Which, to say the least, rather distinguished Robert from most of the rest of us living in the area, right from the start. Some have even speculated that being such a diehard Dodger fan surrounded by so many crazed Yankee fans was the real reason why Robert had to move way the heck out to Elko, Nevada, in the first place. Total baloney. No, the real reason Robert became a Dodger fan and then by and by moved way out west to Elko was, and will remain, a treasured family secret, not to be revealed here. So rest easy and in peace, dear brother. “Dem Bums” got to win the World Series again any year now. Robert was preceded in death by his parents Eugene and Catherine Barker and brother Larry, and is survived by his brother Gene (Edith), Boise, ID; sister Ginger (Joseph) Dominic, Galloway, NJ; brother Richard (Joan), Toms River, NJ; brother Bill (Sharon), Shelton, WA; numerous nieces, nephews and other family members living all over our beautiful land; and dozens of dear friends he made in Elko over the years. A memorial service celebrating Robert (Bob) Barker’s life of honorable service to both his country and community will be duly held in Elko at a future date still to be determined.

The family of Robert (Bob) Roger Barker created this Life Tributes page to make it easy to share your memories.

Robert to his family members...