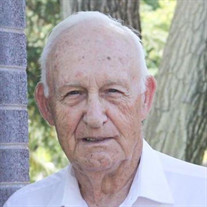 Robert (Bob) Raymond Ford passed away on Thursday December 3, 2020. Born to Albert Ray Ford and Beatrice Henderson on April 5, 1930 in Fairmont, West Virginia. Bob retired from the Union Pacific Railroad after 30 years as a dispatcher. He severed in the Army as a Sergeant in the Korean war and was proud to be a Veteran. Being a combat diver made Bob an experienced swimmer who was at home being in and on the water. He enjoyed spending his free time camping, fishing and boating with his family and friends. He was adept at wood working and made many beautiful items over the years. Bob was an original character and a kind-hearted person who was willing to help anyone who asked for it, usually putting himself aside. Bob is survived by one sister, Dottie Harrington, two daughters, Pamela Lynn Ludwig and Michelle Lee Barndt (Charles) and five grandchildren, Josh Ludwig (Felissia), Robert Wageman (Lydia), Brittney Ludwig, Joseph Barndt and six great- grandchildren, Austin Lewis, Hunter Ludwig, Madison Beckstead, Harmony Beckstead, Wyatt Wageman, Serenity Parker. Bob lost his loving wife of 67 years, Martha Ford in March of this year. Being together again, we hope that he can get a word in edgewise. He is preceded in death by his father Ray Albert Ford, mother Beatrice Ford, sister Shelia Tanner, grand-daughter Erin Ann Wagemen and son-in-law Blaine Ludwig. A celebration of life for Bob will be held at a later date.

The family of Robert "Bob" Raymond Ford created this Life Tributes page to make it easy to share your memories.