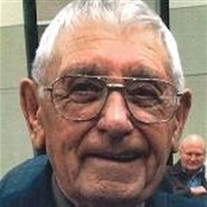 Robert Earl Mueller “Bob” Robert Earl “Bob” Mueller died peacefully on Sunday, June 11, 2017 in his sleep. Bob was born February 17, 1938 in Ulm, Sheridan, WY to G.R. and Virginia Mueller. Bob was preceded in death by his wife, Edy Lou, sister Bebe, and brother Dean. He is survived by his younger brother, David Mueller. Bob was married to Edy Lou Hinton in 1972. He is survived by his sons, S. Craig Hinton, L. Chad Hinton and R. Colt Bridge and his daughters, Ginny Colburn and Christy Bush. Bob is also survived by his grandchildren Katie Ilic, Kalley Radford, Lindsey Hinton, Kirby Hinton, Clark Hinton, Tyler Hinton, Ashley Bowes, Hayden Bush, Bridger Bush, Amanda Stephenson and great-grandchildren Emma Ilic, Aly Bowers, Cece Bowes, Leo Bush, Shane Radford, Hank Radford and Kennedy Radford. Bob volunteered throughout his life. He was very active and involved with coaching sports with his kids and neighbors. Bob was very supportive of all the kids that he met in sports and all other events. Bob had music throughout his life from a young age until he passed. He played the bass guitar as well as many other instruments. But, he was also a singer. Bob loved to entertain the audience with music and commentary. He was in several oldies and western bands and he played every Friday at the Sandy Senior center. Bob was very active at the Sandy Senior Center. He was president (dictator) over the center for seven years. He was involved in many aspects of the center’s activities and functions. No one will ever be able to top Bob’s ability to emcee any event. He loved to golf at least two times a week with the “Senior Fighters” and long-time friends. He will be greatly missed by many people. Bob served our country in the U.S. Air Force in encryption, which allowed him to travel overseas. While in the Air Force, he also rodeoed and fought bulls while stationed in Spain. He had a great career in telecommunications, where he met many people. Bob never met a stranger. Graveside services will be held, Thursday, June 15th, 10:00 am at Elysian Burial Gardens, 1075 East 4580 South, Millcreek, Utah. Memorial donations will be appreciated at the Sandy Senior Center located at 9310 South 1300 East, Sandy, Utah 84094.

The family of Robert "Bob" Earl Mueller created this Life Tributes page to make it easy to share your memories.