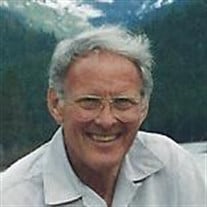 1926 – 2019 Robert (Bob) Davis Chipman, 93, passed away on Friday, May 24, 2019 in Provo, Utah. Bob was born in American Fork, Utah to Davis Houston and Ora Whipple Chipman. He spent his boyhood years in Lehi and Salt Lake City, Utah. Bob earned his bachelor’s degree in Civil Engineering from University of Colorado Boulder as well as an officer’s commission in the Navy. While attending CU, Bob participated in collegiate track and won the mile in both the Regional AAU meet and Big Seven Conference. Bob served as a missionary for The Church of Jesus Christ of Latter-Day Saints in the Western Canadian Mission (British Columbia, Alberta, and Saskatchewan). When Bob returned from Canada, he went to work for the UCLA Office of Architects and Engineers and attended grad school. While at UCLA, he met and married Victoria Smith in the Salt Lake Temple. Bob and Vicky went on to have 5 children who were the light of their lives. Bob and Vicky were only children and they were especially delighted with the continual growth of their family: children, grandchildren, great-grandchildren. Bob loved the outdoors and shared that love with all of his family. Bob worked as an aerospace engineer, became an expert in experimental stress analysis, and lectured on the subject throughout the country. He taught engineering at UCLA. He worked for a period of time in Detroit, Michigan but eventually settled in Colorado where he worked in education, pharmacy design and installation, physical therapy equipment and many other endeavors. Bob enjoyed consulting with his son, Steve, in setting up Caldera Engineering in Utah. Bob is survived by his wife, Vicky; his children Susan (Paul) Barker, Kathryn Jensen, David (Lisa) Chipman, Christine (Ed) Formica and daughter-in-law Camille Chipman. He was preceded in death by his son, Stephen Chipman. Bob is also survived by 24 grandchildren and 34 great-grandchildren. The funeral service for Bob will be Saturday morning, June 1, 2019 at 11:00 at the Grandview South Stake Center, 1122 Grand Avenue, Provo, 84604. The viewing will be from 9:30 to 10:30. Interment will be at Lehi City Cemetery. In honor of Bob’s life-long desire to continually serve others, memorial donations may be made in his name to the Humanitarian Services of the Church of Jesus Christ of Latter-Day Saints. Donations can be made online (https://www.ldsphilanthropies.org/humanitarian-services

The family of Robert Davis Chipman created this Life Tributes page to make it easy to share your memories.