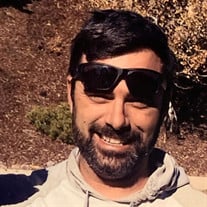 Robert Gary Davis, 39, passed away unexpectedly on July 8, 2021. He was the most incredible. Father, husband, son, uncle, cousin, brother, and friend. Robert was born July 17, 1981 to Diane Jeremiah and Gary Davis. He has 3 brothers Billy, Jonathan and Joseph. He has 6 children, Elizabeth (19), Izabelle (16), Jeremiah (14), Sophia (8), Samantha (5), Robert (2). He happily married Leigh Ann Wheeler February 15, 2018, both as self employed landscapers. He was also accepted as a son to his stepfather Dennis Jeremiah after his father suffered from a stroke leaving him crippled and unable to speak. Robert was a very outgoing person who would do anything to bring a smile to someone's face. It was very rare to catch him without a goofy face. Many people would know Robert by other names such as, “John Stamos” or “Frank Rizzo” because he loved to joke around with new people he encountered. He never forgot a name, face, or story told. He was a hardworking, dedicated man who did everything he could to give his family the best life possible. He was a very loving and accepting person who never judged a soul. Robert enjoyed many things such as hiking, camping, dancing, playing pool, karaoke, baseball or anything that involved his family. He was a christian with much love for God. Robert overcame so many difficult things throughout his life. All he ever wanted was all of his children happy and to know the beauty of simplicity. He wanted them to know that love comes from people not things. Robert was preceded in death by Gary Davis (Father). If we listen close enough we can probably hear them playing baseball and laughing about some silly joke from years ago. One thing we can be sure about is that Robert is with his family right now smiling at how proud he is of them. While Robert's life may have been cut short we know that he is at peace and was content with his life. He will always be in our hearts and memories and will never be forgotten. A viewing was held on Wednesday, July 14, 2021 at Premier Funeral Services, 67 East 8000 South Midvale, Utah from 6-7pm and funeral services will be held from 7-8pm.

Robert Gary Davis, 39, passed away unexpectedly on July 8, 2021. He was the most incredible. Father, husband, son, uncle, cousin, brother, and friend. Robert was born July 17, 1981 to Diane Jeremiah and Gary Davis. He has 3 brothers Billy, Jonathan... View Obituary & Service Information

The family of Robert Gary Davis created this Life Tributes page to make it easy to share your memories.