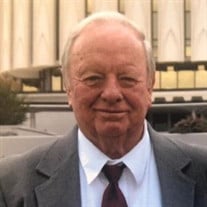 Robert “Max” Fitzsimmons, age 87, passed away on January 30, 2022 at his home in Provo, Utah. Max was born on May 15, 1934 to Athol and Juanita Walker Fitzsimmons in rural Darlington, Missouri. Max grew up on farms in the Gentry, Missouri area, graduated from Albany High School in Albany, Missouri in 1952 and then moved to Kansas City, Missouri to work and live. He moved to Albany, Missouri in 1956 to open Max’s Mobil Service. He was drafted into the U.S. Army in 1957 and discharged in 1963. Max went to work as a sales representative for Kent Industries and later for Crest Industries and traveled Missouri, Kansas, and Oklahoma from 1964 to 1990. On May 15, 1969 he married his eternal companion, Loraine Kay Zeigel. They are the parents of Kim, Jay, and Jill, grandparents of Bradley, Brian, and Kevin King, Makinna, Emilee, Harper, and Carson Boone, great grandparents of Lexi, Bridger, Dexter, and Stella King. Max was the owner and operator of Fitzsimmons School Bus Company and furnished school transportation for Albany School District from 1986 to 2005. Max & Loraine moved to Provo, Utah in 2009 to be near family. Max enjoyed playing golf and actively played until his health prevented him from doing so. He served two terms as president for the Albany Country Club. Max was a devout member of The Church of Jesus Christ of Latter Day Saints and served faithfully in various leadership positions including Branch President for over twenty years. Max is survived by his devoted and loving wife, Loraine, children Kim [Danny] King, Sturgis, Michigan, Jay Fitzsimmons, Provo, Utah, Jill [Mark] Boone, Provo, Utah, grandchildren, and great grandchildren, extended family and many friends. Max will be dearly missed. He will always be remembered for his devotion to God, love of family, witty sense of humor, sharp mind and passion for golf. Funeral services will be held on February 7, 2022 at the Provo West Stake Center of The Church of Jesus Christ of Latter-day Saints, 2530 W. 200 S. Provo, Utah, at 11:00 a.m. Visitations will be held at the same location on February 6th from 6:00 p.m. – 8:00 p.m. and on February 7th at 10:00 a.m. Interment will be at Spanish Fork Cemetery in Spanish Fork, Utah.

The family of Robert Max Fitzsimmons created this Life Tributes page to make it easy to share your memories.