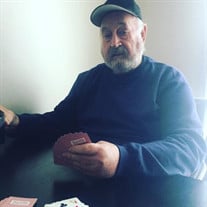 Robert “Bob” Fry was well known and respected in his trade as a Master Electrician. Bob earned his stripes, twisting wire for many years before becoming the chief electrical inspector for Salt Lake City. Upon his retirement he went to work for Forsgren Engineering doing plan reviews and inspections all the way up until he passed. Bob was recognized numerous times by the IAEI and If you had a code question or had an electrical problem, he was your man. When not working or attending one of his kids sporting events, Bob loved to golf, fish at the Gorge, play gin and his story telling was legendary. Dad was well traveled, visiting 43 countries and travelling the world twice over. He was a proud patriot, serving in the United States Navy during Korea and was always reminiscing about his time in the service with his brothers Terry and Jim. Bob was stubborn but had a heart of gold. He would give you the last dollar in his wallet or the shirt of his back if he knew it would get you to a better place. Bob knew a lot of people, saw a lot of things but always told us “If you have enough friends to count on one hand, you are doing better than most.” Its words of wisdom like this and his witty one-line comebacks that we will forever remember. Survived by children Jordon, Justin and Janae (Scott). His grandchildren Korbyn, Kooper, Kenzli, Erica, Matthew, Jasmine, Jacob and Noah. Preceded in death by son David and daughter Nancy. Survived by his siblings Jim (Midge) and Terry, preceded in death by his sisters Barbara and Carol and their parents. Special thanks to Amanda and Vanessa who made sure Dad was taken care of over the last couple years. These two ladies put his health, happiness and well-being above their own always, and they both meant the world to him. A gathering for family and friends will take place Monday, June 14th, 6 - 8 pm at Premier Funeral Services, 67 E. 8000 So. Midvale. A ceremony with Military Honors for Robert’s ashes will be held Tuesday June 15th at 11:00AM at the Utah Veterans Memorial Cemetery in Bluffdale, UT (17111 S 1700 W, Bluffdale, UT 84065) ------------------------------------------------------------------------ A message from George Williams: Bob Fry passed away on Tuesday. I first met Bob Fry around 2006. I was 24 and he was about 70. I had never had a friend that much older than me, but we hit if off right away and age didn’t matter. He was one of the few in the business willing to take me under his wing and show me the ropes. Because of that, I know far more than I would otherwise. From what I hear he was pretty difficult to deal with back in his SLC days, but I remember him telling me “Son, you’ll catch a lot more bees with honey than you will with vinegar.” I wasn’t sure what the point of catching bees was, but I think over the course of his career he had figured out that treating people the right way made for a happier life. I’ve always tried to follow that advice as an inspector and in my everyday life. Bob told me a lot of stories, most of them would make a sailor blush, but some of the ones worth repeating include setting off firecrackers under the grandstand at the old baseball field with his brothers, installing knob-and-tube wiring with his uncle when Bob was about 11, numerous shenanigans while in the Navy – some of which were legal, an airline executive trying to bribe him with a weekend in Florida in order to pass an inspection, and a long list of other interesting situations and experiences while working in Salt Lake City. Bob was never very politically correct, which might be an understatement. I have to admit that sometimes he said a few things that are no longer acceptable in modern society, but one way or another he navigated the world as it changed over time. Because of that, he was able to continue working in the industry as an inspector almost all the way up to then end of his life. That’s pretty impressive in its own right. I don’t know Bob’s full life story, I don’t claim to have known him best, but I’m glad to have been his friend and to have known such a legendary guy/personality. I know Bob grew up in Salt Lake, spent some time in the Navy, was an electrician, worked for many years in Salt Lake City, loved to golf, and worked for Forsgren Associates as an inspector for most of the last 15 years. I believe he was a member of IAEI for 40+ years which might be some kind of record. To his family, we’ll all miss Bob, know that his thumbprint is on a few thousand buildings around town, he’d be proud of that. RIP my friend. - George (on behalf of the many that knew Bob Fry)

Robert &#8220;Bob&#8221; Fry was well known and respected in his trade as a Master Electrician. Bob earned his stripes, twisting wire for many years before becoming the chief electrical inspector for Salt Lake City. Upon his retirement he went... View Obituary & Service Information

The family of Robert Keith Fry created this Life Tributes page to make it easy to share your memories.

Robert “Bob” Fry was well known and respected in his trade as...