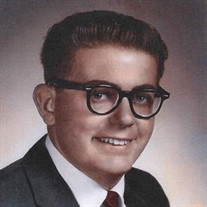 Our unforgettable husband, father, grandfather, brother, uncle and friend was released from this life early in the morning of April 22, 2020. Bob was friendly and outgoing, always ready to share a joke or story with others. No one was a stranger to Bob and he will be sorely missed. Robert Edward Hahne was the older of two children born on May 12, 1939 to Marian Elizabeth Sherratt Hahne and Leslie Louis Hahne in Hailey, ID. He is preceded in death by both his parents and his younger brother, Louis Rae Hahne, his daughter Jill Hahne Adams, infant children David, Mark and Rebecca Hahne. Bob married his eternal sweetheart, Karen Weston in the Logan Temple of the Church of Jesus Christ of Latter Day Saints on July 3, 1963. He is survived by his wife and 5 children, Craig (Arlana) Hahne, Ann (Brian) Kelly, Beth (Raynord) Cornelius, Jared (Katy) Hahne and Reed Layne Hahne. He is also survived by his grandchildren Erin and Weston Adams; Spencer, Tanner and Nathan Hahne; Nikole and Madalynn Kelly; Jezreel (Matthew) Christiansen, and Jannessa Hahne; Alexander, Christian, Joshua and Samuel Hahne and great grandson Draven Christiansen. Bob’s happy childhood was spent in Cedar City, UT. He graduated from Cedar High School in 1957. Immediately upon graduation, he joined the Utah Army National Guard and served honorably for 8 years. He began his secondary education at College of Southern Utah in Cedar City, UT and graduated with an Associates of Science degree. A lifelong member of the church, he served a mission for the Church of Jesus Christ of Latter Day Saints in the North British Mission, England. Upon returning from his mission, he continued college at Utah State University in Logan, UT and graduated with a bachelor’s degree in Civil Engineering. This is where he met Karen Weston and they began their married life in Logan, Utah. He completed his Masters in Civil Engineering at Brigham Young University in Provo, UT. Even with a master’s degree from BYU, he remained a true, blue Aggies fan. His engineering career began at Geneva in Orem, Utah and from there he gained employment with the Army Corps of Engineers. Bob was a hardworking and dedicated engineer. His work ethic and dedication to his career set a wonderful example for his children; he taught us the value of hard work. After retirement from the Army Corps, Bob became a service missionary for the Church of Jesus Christ of Latter Day Saints in Salt Lake City Utah in the Land Acquisitions department. He then was called to serve in the Illinois, Nauvoo mission for the same church with his wife and their youngest son, Reed. This was a wonderful experience and time in their lives. His love of Nauvoo and the memories of service there, were always cherished by him. Bob enjoyed volunteering at SCERA Shell performances and the Timpanogos Storytelling Festival. He also served as an ordinance worker in the Provo, Nauvoo and Timpanogos temples of the Church of Jesus Christ of Latter Day Saints. Bob was a storyteller. He loved talking to others and always had a “funny” to share. He was known to be a friend to everyone and always had a smile for others. His hobbies can be summed up in one word: Family. He loved his family and getting together to celebrate every holiday and birthday. Bob had a strong testimony of the Church of Jesus Christ of Latter Day Saints and loved our Savior. He has left an unfillable hole in our lives but we find peace in knowing we will see him again.

Our unforgettable husband, father, grandfather, brother, uncle and friend was released from this life early in the morning of April 22, 2020. Bob was friendly and outgoing, always ready to share a joke or story with others. No one was a stranger... View Obituary & Service Information

The family of Robert Edward Hahne created this Life Tributes page to make it easy to share your memories.