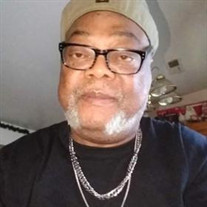 On Saturday, January 2, 2021, Robert Charles Hardridge, loving husband and father of six, passed away peacefully in his sleep at the age of 71. On February 2, 1949, Robert was born in Muskogee, Oklahoma, to Christine Hardridge Burnett Groves and Late Floyd Cotton. He enlisted into the Navy in 1970, where he served his country. Upon his return from the Navy, he moved to Salt Lake City, Utah, in 1989, and that is when he met his queen, Bertha, in 1991. On April 25, 1993, he married Bertha Bey and raised their six children: four sons and two daughters. He was a loving gentleman who enjoyed the simple things in life: conversations, listening to music, and spending time with his boys, just playing Dominos. He was an incredibly wise and intelligent individual; he could hold a conversation with anyone, at any level. He was always witty, brought laughter to the room, and put a smile on everyone's face. He loved to read just as much as he loved his westerns movies. Robert was preceded in death by his father Floyd Cotton and his three brothers Clifton, Roosevelt, and Ernest Burnett. He is survived by his wife Bertha and his six kids: Robert Jr., James, William, Andre, Alesia, and Nina. His six sisters: Martha, Shirley, Rosetta, Janice, Lisa, and Tina. His five brothers: Verlen, Ivory, Preston, Maurice, and Lee Burnett. All his Brothers and Sisters in law. His 28 grandchildren and all his nieces and nephews. His funeral services will be held on Monday, January 11, 2021, at the Premier Funeral Home, at 67 E 8000 S Midvale, UT, 84047; from 10:30am - 12:00pm Family Services and 12:00pm – 2pm Military Honors/Family Services. If you wish send any Flowers address to the funeral home.

On Saturday, January 2, 2021, Robert Charles Hardridge, loving husband and father of six, passed away peacefully in his sleep at the age of 71. On February 2, 1949, Robert was born in Muskogee, Oklahoma, to Christine Hardridge Burnett Groves... View Obituary & Service Information

The family of Robert Charles Hardridge created this Life Tributes page to make it easy to share your memories.