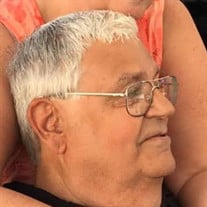 Robert Arthur Harris 1945 ~ 2018 Robert Arthur Harris, 73, passed away peacefully December 19, 2018 from complications of heart surgery, at VA medical center, Salt Lake City. He was born in Kaysville, UT on November 11th 1945. He attended Salt Lake Trade Tech, until the time he enlisted in the US Army. During his time in the army he met the love of his life, Carolyn Jean Colby. They were married August 27, 1966 and remained so for the entirety of his life. His dogs were also a big part of his life. Robert served his country faithfully including volunteering for service in the Vietnam Conflict. When he returned from Vietnam, upon Honorable Discharge from active duty upon completion of his Enlistment, he started his career at International Harvester heavy truck division, first as a mechanic then later as the Shop Foreman. During this time he started school at Westminster College Salt Lake City Utah, majoring in Business Administration. He moved up to Service Manager at Bill Breck Dodge in Tucson Az. After Moving Back to Utah; Robert opened his own business, Automotive Lift & Equipment, which he ran successfully until his retirement. He was passionate about classic cars, and gardening. He could always be found tinkering in the garden or in his shop. He passed these traits on to his 3 sons. Robert is survived by his wife, Carolyn Colby Harris (West Jordan UT). His sister Linda Eckersley (Mesquite NV); brother Sam Harris (Dallas TX). His sons, Richard William Harris (Salt Lake City UT); Michael Robert Harris (Salt Lake City UT); & Marc Irel Harris (Salt Lake City UT); and daughter Tara Lee Bates (Salt Lake City UT). He loved & adored his grandchildren, Angie Tippetts, Madelinn Harris, Samantha Harris, Katrina Harris, & Dylan Harris. He also loved all of his great grandchildren. His parents preceded him in death. Memorial services will be held 12:00 Noon, Saturday, January 5, 2019 at the LDS Chapel located at 2666 West 7000 South, West Jordan, Utah. Interment will be at the Utah Veterans Memorial Park at a later date.

The family of Robert Arthur Harris created this Life Tributes page to make it easy to share your memories.