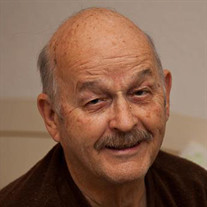 Robert (Bob) Duane Hatch, Sr. 1930 - 2017 our father, grandfather, great-grandfather, uncle, brother and friend passed away peacefully March 15, 2017 in Layton, Utah at the age of 86 surrounded by loved ones. He was born to Sisson Chase and Hazel Coult Hatch on March 29, 1930 at Holy Cross Hospital in Salt Lake City, Utah. He married a cute little red-head Beverly (Bev) Sedgwick on June 19, 1959 in the Salt Lake Temple, to whom he was married for more than 51 years. Growing up Bob lived in many places, but his favorite was Kamas, Utah where his father was the superintendent of the fish hatchery. He and his brother Jerry would accompany their father on horseback deep into the Uintah Mountains where they would plant fish in the alpine lakes. He often said his time in Kamas was a “boy’s dream come true.” He began his missionary service for The Church of Jesus Christ of Latter-day Saints in the Near East Mission headquartered in Beirut, Lebanon in 1950, and finished in the British Isles because of unrest in the Middle East. In addition, he served a six-month mission in Northern California and in the United States Army in the Korean conflict from 1953 – 1955. He graduated from Weber High School, Weber College and received bachelor’s and master’s degrees from Brigham Young University with an emphasis in public address. He later served as the debate coach at BYU. Bob had a varied and adventuresome career beginning with employment at Ames Research Center in California and as a management analyst at Hill Airforce Base in Utah, after which he built and owned several businesses. He worked on many Utah political campaigns and spent 1 ½ years in Washington, D.C. volunteering on the 1984 Reagan/Bush campaign. As a consultant he traveled to Europe, Russia, Egypt and Armenia. He was generous to a fault, made friends wherever he went and positively influenced many people. Bob was preceded in death by his wife Beverly, their infant son Tyler Sedgwick Hatch, his sisters Laura Voorhees, Marian Hatch, Carol Jean Moore, his brother Kenneth Hatch, his great-grand sons Landen Robert Hatch, and Easton Kerry Trotter and his parents Sisson Chase and Hazel Coult Hatch. He is survived by his son Robert Duane (Diana) Hatch, Jr. of Kaysville, Utah, and daughter Michele (Scott) Trotter of Centerville, Utah; six grandchildren and seven great-grandchildren; and brother and sister, Jeremiah Hatch of Salt Lake City and Mary Owen Heslop of Alpine, Utah. Funeral Services will be Friday, March 24, 2017 at 10:00 a.m. in the Woodland Park Ward meetinghouse at 2400 N. University Park Boulevard, Layton, Utah. The viewing will be from 8:30 a.m. to 9:45 a.m. in the Relief Society room of the meetinghouse. Interment will be at 2 p.m. in the Spanish Fork City Cemetery.

Robert (Bob) Duane Hatch, Sr. 1930 - 2017 our father, grandfather, great-grandfather, uncle, brother and friend passed away peacefully March 15, 2017 in Layton, Utah at the age of 86 surrounded by loved ones. He was born to Sisson Chase and... View Obituary & Service Information

The family of Robert Duane Hatch Sr created this Life Tributes page to make it easy to share your memories.