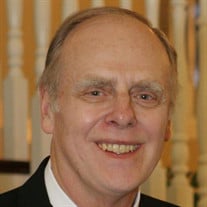 Robert James Hoffman “RJ”, “Bob”, was a wonderful husband who cherished his wife Karen Brady Hoffman. They were sealed in the Salt Lake City Temple and faithfully married for 38 years. Taking his role as a provider and patriarch seriously, he deeply loved their four children Brian, Heather Cardall (Craig), Dane, and Taitum. The greatest joy of his life were his five grandchildren Cadence, Trey, Alyson, Layton and Lucas. They adored their Papa! Although appearing grumpy at times, he was kind hearted and good to the core. Born March 13, 1943 in southern Idaho, he was a brilliant yet humble man from a third-generation wheat farm. He honorably served his nation during the Vietnam Era as a mechanic in the United States Air Force. Following his passion for science and mathematics, Bob attended the University of Utah obtaining a Masters Degree in Physics. He served his community throughout his career at the Veterans Hospital, which he knew could save a life. He was known for riding his motorcycle at any opportunity, would often take naps in his sports car, and would practice his swing by chipping pine cones over his house. As an amateur photographer, Bob could be found enjoying his pictures while listening to music on his self-made audio equipment. His admiration for this world was second only to his love for his Lord and Savior Jesus Christ. He was a faithful member of The Church of Jesus Christ of Latter-day Saints. We will deeply miss the talent and courage of such an ethical man. He returned to his loving Heavenly Father on February 10, 2022, surrounded by family who love him. Robert died of natural causes and will be remembered for his intellect and enduring faith. Memorial services are as follows: Visitation Tuesday February 15 6:30pm to 8:00pm and Wednesday February 16 from 11-11:45am. Funeral services at 12:00 noon, all at the Union Fort 6th Ward, 500 East 6770 South Midvale, Utah. Interment to follow T Mt View Memorial Park, Cottonwood Heights, Utah.

Robert James Hoffman &#8220;RJ&#8221;, &#8220;Bob&#8221;, was a wonderful husband who cherished his wife Karen Brady Hoffman. They were sealed in the Salt Lake City Temple and faithfully married for 38 years. Taking his role as a provider and... View Obituary & Service Information

The family of Robert James Hoffman created this Life Tributes page to make it easy to share your memories.

Robert James Hoffman “RJ”, “Bob”, was a wonderful husband who...