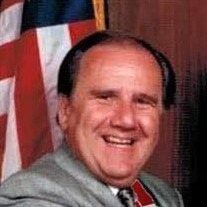 Robert J Holmes Robert J Holmes was born in Salt Lake City, Utah, to Edward J Holmes and Helen J Holmes. He passed away May 27, 2020 in Salt Lake City, Utah. Robert married Loreen Holland in the Salt Lake Temple on April 8, 1955. Loreen and Robert were blessed with three of the most beautiful and wonderful daughters, six grandchildren and two great grandchildren, along with spouses of Rhonda, Lynette and Karli. Bob is survived by his spouse Loreen H Holmes, three daughters: Rhonda L Shumway, Lynette H Muir (Scott W Muir), and Shelli A Holmes. He also is survived by five grandchildren and two great grandchildren. The grandchildren are: Dustin Shumway (Jamie Sullivan Shumway); Tyler Shumway; Alexa Muir; Karli Muir Hull (Brandon Hull); Garrett S Muir. The two great grandchildren are: Bryan Shumway 5 years of age and Ruby Shumway age 2 years. He is predeceased in death by his parents, a son in law Brian Shumway and a grandson Cody Shumway. Bob is survived also by three brothers and their spouses: Paul Holmes (Elna), Brent Holmes (Lucy), and Bruce Holmes (Joan), as well as numerous nieces, nephews and extended family. Bob was always a loyal, dedicated and active member and office holder in The Church of Jesus Christ of Latter-day Saints, including High Priest Group advisor, Sunday School President, scout leader, and many other callings. Bob loved travel, tennis, golf and being with family. One of Bob’s favorite activities was sunning himself on one of the Hawaiian beaches surrounded by family. Bob also loved opera, Broadway productions, and stage plays. Bob and Loreen, various family members, and many friends, traveled to Hawaii numerous times, to Europe, to Japan, to China and to Thailand. Bob took great joy in owning and operating a travel agency with his daughter, Rhonda Shumway during the last several years of his life. In addition to church and family activities, Bob was very active in Republican Party politics, holding responsible positions in the local Party. Both Bob and Loreen contributed in time and money to the Party over the past four decades. In 1965 Bob was offered a position with a large financial institution in Los Angeles and moved the family to Southern California in that year. Bob and Loreen maintained their interests in travel, the church and politics during the years in Southern California. All three daughters consider themselves to be “California Girls”. There will be a graveside service at the Elysian Burial Gardens cemetery located at 1075 East 4580 South on Saturday May 30, 2020 at 10 am. There is to be no formal church or funeral home service. Burial will be at Elysian Gardens immediately following the graveside service.

The family of Robert J Holmes created this Life Tributes page to make it easy to share your memories.