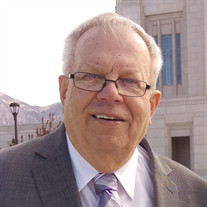 Robert Wayne Perkins The amazing “Grandpa Wayne,” age 74, died Thursday, July 29, 2021, after a life of service to Jesus Christ, to his family, and to anyone who crossed his path. He was son of Wayne B Perkins and Alice Elinor Schmid Perkins Gortcinsky and his stepdad, Elmer Richard “Dick” Gortcinsky. Wayne was born December 10, 1946, in Montpelier, Idaho. Wayne's father, Wayne B, passed away in a work accident four months before he was born. He lived in Grandpa and Grandma Schmid’s home in Bern, Idaho with his mother and grandparents – and with his aunts and uncles who still treat him like their little brother. He lived in Bern until he was five when his mother married Elmer Richard “Dick” Gortcinsky and moved to the Ogden area. Wayne spent his summers for many years afterwards returning to Bern to stay with his grandparents and work in the area with his extended family. Wayne served a mission for the Church of Jesus Christ of Latter-day Saints to the Western Canadian Mission. He married Jean Eileen Duncombe in 1968 in the Salt Lake Temple. Wayne attended trade school and worked as a journeyman welder, steel fabricator, and a mechanic – and he could fix anything that needed fixing as long as it wasn’t made of wood. Wayne loved to spend time with his wife, children, and grandchildren, enjoying time outdoors and serving others. He enjoyed being involved with scouting and teaching young men to be good men. He was often found at someone’s house fixing a lawn mower, repairing a car, and helping anyone who needed it with whatever they needed. Wayne is survived by his wife, Jean; three children, Tammy (Bard), Greg (Traci), and Jeff (Sharon); 13 grandchildren and spouses; 2 great granddaughters; and his sisters, Kathy (Bob), Nanette (Rodger), Dot, and Jennifer (Troy). Wayne was preceded in death by his father, Wayne, his mother, Alice, his stepdad, Dick, and his grandson, Samuel. Funeral services will be held Monday, August 2, 2021, at the Sunset Ridge 1st Ward Building, 8107 S 6700 W, West Jordan, Utah 84081. The viewing will be held from 9:30-10:45 AM with the funeral service following afterwards at 11:00 AM. A brief interment service will be held at the Bern Cemetery, in Bern, Idaho, the following day, Tuesday, August 3, 2021, at noon (12:00 PM).

Robert Wayne Perkins The amazing &#8220;Grandpa Wayne,&#8221; age 74, died Thursday, July 29, 2021, after a life of service to Jesus Christ, to his family, and to anyone who crossed his path. He was son of Wayne B Perkins and Alice Elinor Schmid... View Obituary & Service Information

The family of Robert Wayne Perkins created this Life Tributes page to make it easy to share your memories.