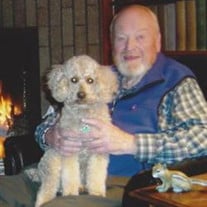 “You only live once, but if you do it right, once is enough.” Bob Pruitt caught the midnight flight to the Next World early on November 19, 2014 from his cherished home in Olympus Cove in SLC. He was born Robert Grady Pruitt, Jr. on February 9, 1930, in Atlanta, GA, the son of Robert G. Pruitt (Sr.) and Jeanne Ruth “Ruby” Crockett Pruitt. He grew up in Atlanta and graduated from Emory University with B.A. & M.S. degrees in Geology. He married Ruth Emily Brooks on September 7 and moved West to Butte, MT, as a Geologist with the U.S. Atomic Energy Commission, all in 1952. During the Korean War he served in the U.S. Army with the 525th Military Intelligence Group based at Ft. Bragg, NC, and then returned to his AEC job in Montana. In 1956 he and his small family moved to Salt Lake City when he took a new job with the Utah State Office of the U.S. Bureau of Land Management (BLM) working as a Geologist and expert trial witness on mining claims being flooded by Glen Canyon Reservoir (Lake Powell) and Flaming Gorge Reservoir. In 1959, not satisfied with a career in government, he enrolled at the University of Utah Law School while still working with BLM and was awarded a Juris Doctrate (J.D.) degree in 1962. Following graduation Bob left the BLM to practice Mineral Law with Senior & Senior (1962-1966), then Neslen & Mock (1966-1968). In 1970 he organized his own law firm, nationally renowned Pruitt & Gushee, a 12-lawyer firm specializing in Mineral Law with clients worldwide. Bob greatly enjoyed his law practice, particularly when assisting in finding new oil & gas fields, developing new mines or creating some new enterprise. He formed many friendships with his enterprising clients, company decision-makers and their in-house lawyers, landmen & engineers, and even with opposing counsel, government regulators and bureaucrats; many of those client friendships lasted a lifetime. In 1977-1978 Bob served as president of the Rocky Mountain Mineral Law Foundation (of Denver, CO), an organization in which he continued to participate over his lifetime. In 1995, at age 65, he went into semi-retirement, turning law firm management over to others while continuing to work for a few select clients. The law firm officially dissolved at the end of 2007, when it merged into two larger regional law firms seeking Mineral Law experts based in SLC. Bob (then age 77) opted to go into “full retirement,” did some research and book writing, and offered himself as a grey-beard consultant to the many young Mineral Lawyers he had mentored over a long career. Bob had a motto: “You only live once, but if you Do It Right, once is enough.” He held a Commercial Airplane Pilot license, with Seaplane and Instrument ratings (3,500+ hours), and owned several airplanes; he founded GeoScout Land & Title Co. and was legal counsel during the creation and building of Snowbird Ski Resort, where he (and his entire family) hold Lifetime Passes; for a time he held a Utah Real Estate Brokers license; he wore out two tent trailers and two motorhomes traveling all over North America; he and Ruth traveled worldwide (mostly cruises); he was an accomplished still & video photographer; he enjoyed numerous hobbies, crafts and interests, and he had the libraries, paraphernalia and collections to prove it; he ran a home-based Chipmunk Ranch (mostly for the benefit of his grandchildren), and (most recently) he bred AKC miniature red poodles and “designer dogs.” However his greatest lifetime accomplishment was marrying his marvelous and talented wife of 60+ years, Ruthie Brooks – he never was able to figure out how he came to deserve such Good Fortune, love and devotion! Her tragic death on June 20, 2013, after 11-years as a Cancer Survivor, left him devastated. He devoted his remaining lifetime to perpetuating the memory of her remarkable life. Bob is survived by their four children: Bob III, Bonnie P. Weiss, Sandy P. Fishler, and Bill W. Pruitt, and eight wonderful grandchildren (no great-grandchildren yet). His parents and only sibling, sister Jeanne R. Pruitt, all residing in Atlanta, predeceased him in the 1990s. His mortal remains will be cremated and the ashes spread at a secret location, with no ceremony or fanfare. Email your memories and condolences to: [email protected] Instead of flowers or donations to charity, spend the money taking a loved one to dinner, and be grateful. The family would like to express gratitude to Visiting Angels, especially Sydney, and Curo Hospice for their loving care and expertise. Please join family and friends for a memorial service at 6:00 pm on Monday, December 1, 2014 at the Red Butte Garden Orangerie, 300 Wakara Way, Salt Lake City, UT.

&#8220;You only live once, but if you do it right, once is enough.&#8221; Bob Pruitt caught the midnight flight to the Next World early on November 19, 2014 from his cherished home in Olympus Cove in SLC. He was born Robert... View Obituary & Service Information

The family of Robert Grady Pruitt created this Life Tributes page to make it easy to share your memories.