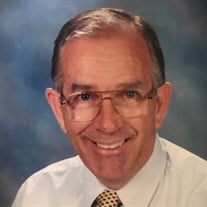 Robert Anthony Savage died peacefully surrounded by family on January 12, 2021 in Orem, Utah. Born August 17, 1938 in Ogden, Utah, Robert was the second son born to Marjorie (née Hatch) and Henry Carlyle Savage. He will be dearly missed by his cherished wife Aida Savage of Las Pierdas, Uruguay, his son R. Hyrum Savage, daughter-in-law Anne (née Wellborn), and his five grandchildren: Jack Wellborn, Emily Louise, Benjamin Hyrum, Henry James, and Katherine Anne, of Henderson, Nevada. Robert is preceded in death by his parents and siblings Henry Carlyle Savage Jr., Ralph Savage, Douglas Savage, and Marjorie Taylor. He is survived by sisters Mary Eddy of Lindon, Utah, Kathy Judd of Orem, Utah, Nancy Hardy of Provo, Utah, Jodi Brandenburg of Everett, Washington, and brothers, Stephen Savage of Shoreline, Washington and Paul Savage of Vineyard, Utah. As a young man, Robert served a mission for the Church of Jesus Christ of Latter-day Saints in the Uruguay-Paraguay Mission (1958-1961). It was there in Uruguay where he met his future wife - Aida Perdomo. After his mission - and a letter-written romance - they married and started a family. Robert graduated from BYU with a degree in political science. He also studied at the Thunderbird International School of Business in Glendale, Arizona. His professional life was in banking, business, and education and he finished his career as a dedicated teacher of international students at the 24th Street Elementary School in Los Angeles, California. Robert served as a bishop for the church in the Alderwood Ward, Lynnwood Washington Stake and in the Adams (Wilshire) Ward in the Los Angeles Stake. His devotion to The Church of Jesus Christ of Latter-day Saints meant that he served selflessly in any calling he held (even Sunbeams). He had a deep understanding of the gospel and had encyclopedic knowledge of its history. His unwavering faith made him an example of honesty and integrity to everyone. Known as "Tony" to his family (nieces, nephews, cousins and siblings), he was a kind and gentle man who loved everyone. Endlessly patient, he was an affectionate Abuelo to his grandchildren - attending and sometimes standing in at memorable events like games, debates and rocket launches. Robert had a mischievous sense of humor, shared a love of technology and sci-fi with his son and enjoyed lively conversation with family and friends. A memorial graveside service will be held at 1:00 pm on Saturday, January 30, 2021 at the pavillion in the cremation gardens at the Provo City Cemetery, 610 South State Street, Provo, Utah.

Robert Anthony Savage died peacefully surrounded by family on January 12, 2021 in Orem, Utah. Born August 17, 1938 in Ogden, Utah, Robert was the second son born to Marjorie (née Hatch) and Henry Carlyle Savage. He will be dearly missed by his... View Obituary & Service Information

The family of Robert Anthony Savage created this Life Tributes page to make it easy to share your memories.