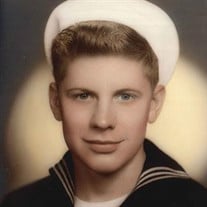 Robert Linell Shelton died peacefully on September 7, 2018 after a long battle with Alzheimer’s. He was born on August 17, 1941 in new Madrid, MO to Helen Marie and Archie Rex Shelton. He joined the Navy at 17 and served on the USS Lexington. His naval service ended 18 ½ years later. Most of the time served in the Naval Reserve. Bob met the love of his life, Linda N. Ream, and they married on Valentine’s Day 1964 and just celebrated their 54th wedding anniversary. Together they raised 3 wonderful sons. Bob owned and operated a dry cleaners for over 30 years. He then went to work for Granite School District as a bus driver for 9 years at which time he changed jobs to become a mechanic for those same buses and later retired after 18 years. He loved camping with his sons and family and friends. Upon retiring, he and Linda traveled and saw a lot of the world. Bob was a proud member of the Independent Order of OddFellows, attaining the highest position, Grand Master of Utah. Member of Utah Lodge #1 and Naomi Rebekah Lodge #1. He was a member of the Church of Jesus Christ of Latter-day Saints. Bob is survived by his wife, Linda, sons, Robert Jr. (Kari), Jason (Amelia) and Jeffery (Sandra), 4 grandchildren, Crystal, Kassandra, Dallon, and Willy, 3 great-grandchildren, Zander, Jasper, and Aidin; 2 sisters, Pat Schneider, Gloria Jean Mason, 3 half-sisters Donna, Judy and Zadie, and 1 half-brother, Steve. A graveside services will be held at Wasatch Lawn, 3401 So. Highland Dr., Salt Lake City, UT on Saturday, September 29th, 11:00 am with a Celebration of Life following the service at the home of Robert and Linda Shelton.

Robert Linell Shelton died peacefully on September 7, 2018 after a long battle with Alzheimer&#8217;s. He was born on August 17, 1941 in new Madrid, MO to Helen Marie and Archie Rex Shelton. He joined the Navy at 17 and served on the USS Lexington.... View Obituary & Service Information

The family of Robert Linell Shelton created this Life Tributes page to make it easy to share your memories.