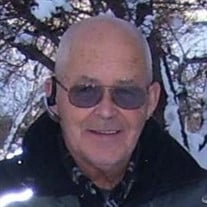 Nov. 23, 1943- Dec. 6, 2015 "Earth has one gentle soul less and Heaven one angel more" Robert Allen Shuffield, age 72, passed away peacefully December 6, 2015 in Salt Lake City, Utah. He was born Nov. 23, 1943 in Ekalaka, MT, a son of Evelyn Margaret Carter and Robert Melvin Shuffield. He graduated from Carter County High School in 1962. He also served in the United States Army from 1963 to 1969 and stationed in Germany for 3 years. He married Maria Munoz Beroiza on November 18, 1977 in Chicago, Illinois and together they had two children. Robert did various jobs after the army and ended up in Chicago, Illinois where he lived for about 10 years and met his wife. He moved to Greybull, WY and took a job with Getter Trucking doing heavy haul, which moved the family to Billings, MT, Lufkin, TX, and eventually to Salt Lake City, UT. Robert decided to take a job with Werner Enterprises and stayed with them until he retired in July 2013, earning the achievement of 2 million accident free miles with them. He enjoyed traveling with his job and was able to visit many friends and family members throughout the years. Robert loved spending time with his 3 grandchildren, attending the Days of 85 in his hometown of Ekalaka, MT and catching up with all of his friends and family. He will be remembered for his big heart, kindness, sense of humor, and his many, many stories. Robert is survived by his son Ed (Kim), daughter Evie, and grandchildren (Maya, Hannah, and Mason), nieces, nephew, and numerous family members. He is preceded in death by his parents and brother, Benjamin Shuffield. We would also like to thank the staff at Avalon West Nursing Home who saw that he was comfortable in his final days. Graveside services will be held on Friday January 15, 2016 at 1:00 p.m. at the Utah Veterans Memorial Cemetery , 17111 1700 W, Riverton, UT 84065. In lieu of flowers, the family suggests that contributions be made to www.gofundme.com/4adp8dpw for burial expenses.

The family of Robert Allen Shuffield created this Life Tributes page to make it easy to share your memories.