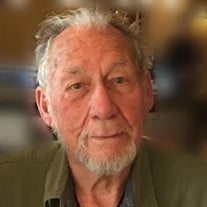 Robert “Bob” Orville Thompson 1928 - 2021 Robert “Bob” Orville Thompson passed peacefully to his reward with his beloved Lord Jesus on September 3, 2021 in Orem, Utah. A 40-year resident of Page, AZ, Bob finished his career as a journeyman machinist with 20 years at Peabody Energy’s Black Mesa Mine on the Navajo Nation. Although he had many titles, one he may have enjoyed the most was when his Navajo friends called him “Shicheii” (grandfather). Bob was born on December 13, 1928 in Tomah, Wisconsin to Orville and Nellie Thompson, who preceded him in death as did his brother Herbert and sister Wanda. Bob was also preceded in death by two wives, Joan and Maxine. He is survived by his wife, Alice Owen of Church Wells, Utah. Although they only married last fall, they were close friends for years and Bob was finally able to convince Alice to say “yes” after numerous requests for her hand. Bob Thompson was a father to, and survived by, Sandy Schulte (Darrell), of Phillipsburg, KS and Linda Aki (Bill, deceased) of Arvada, CO. He was also much more than a stepfather to (and survived by), Lou Sharpe of Fort Collins CO; Nancy Kaiser (Herbert) of Collinsville, Ill; Raymond Sharpe (Christine) of Centralia, Ill; Jim Sharpe (Karen) of Phoenix, AZ; and Amy Ham (Mike) of Franklin, TN. Bob was a grandfather to 21 and a great grandfather to 17. All of his “greats” and “grands” occupied his thoughts and prayers. He loved the guitar, hiking, tinkering with cars and machining projects — but mostly, Bob loved those things because they provided him with opportunities to uplift and counsel people (and make them groan at his unbelievably corny jokes). Bob is fondly remembered by innumerable friends, including many clergy of differing denominational backgrounds. He encouraged them all to focus on the central uniting issues of kindness, humility and love for all of God’s children as taught in the Word. A Celebration of Life service, to be held in Page, AZ, will be announced at a later date to allow the most number of friends and family to gather and remember Bob together.

The family of Robert Orville Thompson created this Life Tributes page to make it easy to share your memories.