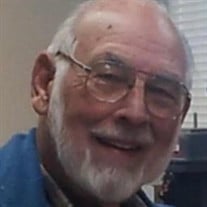 Bob Wallerius 1939-2021 Robert Lawrence Wallerius wanted to be remembered as a “nice guy who was happy and enjoyed life.” Bob’s big smile and quirky, fun personality endeared him to his family and many friends. Bob was often heard to say he was going to live to be 120 – though 38 years short of that goal, he lived 82 full years with the always-positive attitude he learned from his mother. Raising four daughters is among Bob’s biggest achievements. He is survived by his daughters, Kelli Yuen, Kristy Sprague (Mike), Kathy Cherpeski (Tom), and Karry Tippit (Ed), four grandchildren, 11 great grandchildren and his sister, Mary Lou (Jerry). His family remember him as a calming influence, gentle, funny, witty, and so likeable. Bob was preceded in death by his wife, Carolyn and his granddaughter, Karolyn Rose. Bob was born in St. Paul, Minnesota as the only son of Alphonse and Lillian Anderson Wallerius. Bob spent his teenage and adult years in Highland, California and his retirement years in Salem, Utah. Reflecting on his boyhood, Bob said his house was Monopoly headquarters for the numerous neighborhood boys because his dad had real cash registers to hold Monopoly money. Bob’s consistent, reliable nature kept him employed since his youth as a paperboy, photography developer and eventually led to his near-40-year career as a data processor for San Bernadino County. By the time Bob retired, the data that once filled rooms of file cabinets were digitized and could be held in one hand. Bob loved his job and said he wouldn’t change a thing! It was common to see Bob sitting at the computer researching everything from genealogy to product reviews, or in his woodshop creating anything as small as an intricate pen, or as expansive as a 60” x 60” shadow box quilt frame. Bob’s grandchildren have banks made by their grandpa, and his daughters cherish the beautiful wood-crafted treasures that are now a memorial of their father. Bob will be memorialized for more than his skills, but for his innate goodness. His life mantra was “Be kind. Be honest. Follow the rules. Try to be a star in all you do. Practice the Golden Rule. Find a job you enjoy and do it well. Put away a little money each payday. Plan for the future. Enjoy life.” He also learned from life’s ups and downs and advised, “Don’t sweat the small stuff. Things you can’t change are not worth your worry. Having money is important, but it’s not the most important thing. Be happy. Always try to live below your means.” Bob’s upbeat attitude will be missed. Though cancer took him from earth, all that is loved about Bob Wallerius lives on. In reminiscing over his life recently, Bob exclaimed in his usual-cheery way, “Reality has turned out to be far better than anything I might have imagined”. The Wallerius family would like to thank Dr. Steve Wallentine, Dr. Gary Garner and all the wonderful nurses who loved him through his cancer journey. Graveside service scheduled for 1:30 PM January 18th at Montecito Cemetry, Loma Linda California. In lieu of flowers, please donate to the lymphoma & Leukemia society.

Bob Wallerius 1939-2021 Robert Lawrence Wallerius wanted to be remembered as a &#8220;nice guy who was happy and enjoyed life.&#8221; Bob&#8217;s big smile and quirky, fun personality endeared him to his family and many friends. Bob was often... View Obituary & Service Information

The family of Robert Lawrence Wallerius created this Life Tributes page to make it easy to share your memories.