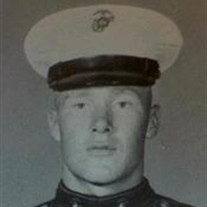 Robert “L” Weaver our hero, husband, father, brother and grandfather, passed away on Friday February 3, 2012 at his home surrounded by all those who loved him dearly in Springville, Utah. Bucks (as known by his grandchildren) was born September 24, 1945 to Evan Dutson & Geraldine Lake Astle in Afton, Wyoming. He graduated from Sweet Water High School in National City California in 1964. Bucks enlisted in the United States Marine Corps. in 1964 right out of high school and served his country loyally for four years, doing two tours of duty in the Veitnam War. He received the Purple Heart, Rifle Expert, Rifle Sharp shooter, as well as the medal of Good Conduct. Bucks married his lifetime love Florine Margaret (Camacho) Weaver on October 26, 1966 in National City California. They were later sealed in the Los Angeles Temple on February 14, 1968. The day before he left for his second tour of duty in the Vietnam War. Bucks loved his family very much and took great enjoyment in teasing, or scaring them. You never knew what would happen next he was always full of mischief and practical jokes. He taught us the meaning of respect, responsibility and unconditional love. He was a loyal and loving companion for our mother. In our eyes he was and always will be a great man whose love for his country, wife, and family were given faithfully and undying. We will miss him greatly. May Heavenly Father keep you in his tender care until the day we meet again and you are there to greet us home. Survived by his loving wife Florine Weaver. His children Christine (Jack) Hunt, Cynthia (Ian) Clemesha, Steve (Staci) Weaver. Grandpa Bucks grandchildren, Jessica, Nathan, Slate, James, Gwen, Autymn, Bethany, Holden, Ethan, Riley, Aidyn, Jadan. His Father Evan D. Astle. His brothers and sisters Kelly, Kathy, Nancy, Claudette, Gwen, and Owen as well as many aunts, uncles and cousins. He is preceded in death by his mother Geraldine L. Astle and step-dad Claude O. Weaver. Funeral services will be held at 11 a.m. on Saturday February 11, 2012 at the Spring Creek 1st Ward Chapel. Located at 860 East 200 North Springville, Utah. Family and Friends may call Friday February 10th from 6 - 8 p.m. at the church and from 10 - 11 a.m. before services. The interment will take place at 2 p.m. on Monday February 13th at the Utah Veteran’s Memorial Park near Camp Williams, 17111 South Camp Williams Road, Bluffdale, Utah.

Robert &#8220;L&#8221; Weaver our hero, husband, father, brother and grandfather, passed away on Friday February 3, 2012 at his home surrounded by all those who loved him dearly in Springville, Utah. Bucks (as known by his grandchildren)... View Obituary & Service Information

The family of Robert Weaver created this Life Tributes page to make it easy to share your memories.