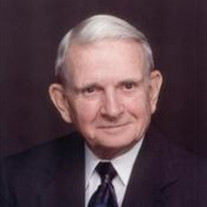 Our loving father, grandfather, great-grandfather & friend passed away October 20, 2012 surrounded by his loving family. Bob was born on July 3, 1914 in Portland, Oregon to Clyde Dixon & Margaret Dreger Wertz. Bob attended Reed College where he played football, tennis, and graduated in Mathematics with Honors. He went on to UCLA where he earned his Master’s degree while teaching Mathematics. WWII interrupted his Doctorate Degree studies. He enlisted in the Air Force and became a flight instructor at the Santa Ana Army Air Base. While teaching, he authored one of the navigational manuals for the Army Air Corp. On April 11, 1947 Bob married his sweetheart, Shirley Jean Anderson. They were blessed with 5 children. Bob joined the Church of Jesus Christ of Latter-day Saints on January 16, 1957. His baptism was always a special memory to him due to the presence of the Prophet David O. McKay. Bob & Jean were sealed in the Salt Lake Temple on April 11, 1958. He has held many callings including High Priest Group Leader, Elders Quorum President, a counselor in the Bishopric and Bishop. He served an LDS mission with his wife to the New York, New York Mission serving as Branch President in Bermuda. His favorite calling was serving faithfully as a Home Teacher. His love of Jesus Christ and his testimony will be felt for generations. Bob had a great work ethic. In his younger years he worked along side his father painting and wallpapering. Bob worked at International Harvester for over 30 years as a fleet salesman and then at TCM, Inc. for 18 years retiring at 89 years old. Bob was also a lifelong member of the Optimist Club. He enjoyed fishing, camping, tennis, all sporting events, amusement parks, the ocean, crossword puzzles and traveling with his sweetheart. Bob is survived by his three daughters and two sons, Margaret, Kathy (Arn) Wilcox, Ed (Sandy), Bob (Celeste), Mary Anne (Paul) McCarty, 25 grandchildren and 36 great-grandchildren. He was preceded in death by his parents, his wife Jean, his sister Helen, grandson Seth Wertz, and two great-grandchildren. Family members would like to thank Millcreek Home Health and Hospice and Amber Goulding for their kindness and service. Funeral Services will be Saturday October 27, 2012 at 1:00 pm at the East Millcreek Stake Center, 3103 East 3600 South. A viewing will be held Friday from 5:30-8 pm at the Stake Center and Saturday one hour prior to the service. Internment: Wasatch Lawn Memorial Park, 3401 South Highland Drive.

The family of Robert L Wertz created this Life Tributes page to make it easy to share your memories.