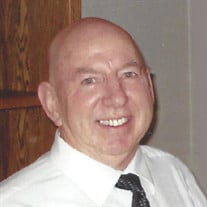 On Saturday, September 19, 2020, Robert "Bob" Scott Woods, beloved husband, father and grandfather, passed away at the age of 76 in his home in Salt Lake City, Utah. Bob was born on May 15, 1944 in a log cabin in the Appalachian Mountains in Newport, Giles, Virginia to Lena Mae Ratcliffe and Roy Rex Woods. He had six sisters, two brothers, and his “favorite” mule named Ajax, to entertain and “pester” him. He was the third child and first boy. His early years consisted of the log cabin, a farm, countless adventures (such as attempting to lasso wild hogs), and a wonderful childhood. His family moved to Cincinnati, Ohio midway through his youth where he completed Jr. High & High School. Bob served a mission in California following his graduation from High School for The Church of Jesus Christ of Latter-day Saints. Upon completion of his mission, he moved to Rexburg, Idaho to attend Ricks College. He then moved to Provo, Utah where he attended Brigham Young University. There he met and married his eternal companion, Georjanna “Jan” Johnson. They were married on July 20, 1973 in Carlsbad, California and sealed for all time and eternity in the Bountiful, Utah Temple a year later. Bob and Jan started a family as quickly as they could. They had always wanted a large family and considered themselves lucky enough to have had two. Bob was a doting father and was extremely proud of his family, often citing them as his greatest accomplishments and sources of joy. Determined to provide for his family, he worked three jobs simultaneously at times to ensure his family was cared for. He was later blessed with two grandchildren, both of whom he adored and who also adored him. Among Bob’s talents, one of his favorites was sports. He loved almost any team sport but was passionate about basketball, baseball, and football. He was an avid baseball and softball umpire and basketball referee. However, it all ended too soon as he “hung up” his referee whistle at the young and peppy age of 74! He was an active member of The Church of Jesus Christ of Latter-day Saints. Due to his impoverished childhood, he often anonymously donated to The Boy Scouts of America so less fortunate boys could attend camps and have money to spend. He was a character who loved to laugh and crack jokes, whether it be of himself or something else. He preferred to take himself lightly and was quite familiar with pranks, teasing and telling amusing stories from his youth and games where he umpired or refereed. Bob was preceded in death by his parents, his treasured wife, and his sister Anita Louise Taylor. He is survived by his children: Krista-Ane (Todd) Gustaveson and Jonathan Woods; two grandchildren: Ryan Gustaveson and Inara Gustaveson: siblings: Edie (Bruce) Chapin, David (Michelle) Woods, Donna (David) Straw, Carol (Jim) Mulberry, Sherry (Jeff) Kennicott, Gerry (Thom) Baxter, & Kevin (Carly) Woods. Bob was a loving and protective father and husband, a giving soul and bright spirit. His laughter, humor, liveliness, hugs and kisses will all be continued with his children and grandchildren. A viewing will be held this Saturday, the 26th from 3:00 p.m. to 4:30 p.m. followed by a Celebration of Life. Viewing and services will be at 3963 South Peachwood Drive, West Valley City. The viewing will follow with a prayer which will include only the closest family members. Afterward, we will congregate in the cultural hall for a program wherein his obituary will be read, we’ll have 2 to 3 speakers, perhaps a musical number (undecided), & closing remarks from the bishop. Following will be a celebration of life for him. Bob hated funerals & said he preferred a party be thrown. We hope people will come ready to share their favorite fun-filled stories of him! There will be food, music, & TVs showing sports & movies he enjoyed (there are so many that we have plenty to choose from). The intent is for people to have a great time, enjoy family & friends, & leave with tears in their eyes due to laughter rather than weeping! Due to COVID, masks & social distancing will be observed.

On Saturday, September 19, 2020, Robert "Bob" Scott Woods, beloved husband, father and grandfather, passed away at the age of 76 in his home in Salt Lake City, Utah. Bob was born on May 15, 1944 in a log cabin in the Appalachian Mountains in... View Obituary & Service Information

The family of Robert Scott Woods created this Life Tributes page to make it easy to share your memories.