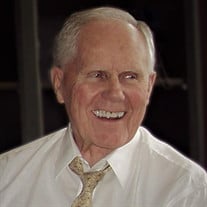 Robert Francis Wright 1931 - 2020 Robert Francis Wright passed away at the age of 88 in Lindon, Utah on August 3, 2020. He suffered from multiple ailments including dementia and melanoma. He was born on Oct. 18, 1931 in Ogden, Utah to Melbourne Ellsworth Wright and Marjorie Mae Millar. He married Joyce Erickson on Sept. 4, 1958 and they were sealed in the Oakland Temple on July 31, 1965. Bob grew up in Ogden, Boise, and Salt Lake City, graduating from East High School in 1949. He served in the Army reserves for four years then went on to the University of Utah and received his bachelor’s degree in business. During this time, he worked at Utah Oil Company where he met Joyce. Music was a big part of Bob’s younger years. He started playing the trumpet at age 9. He paid for his own trumpet lessons with a paper route. In high school, he and some friends started a dance band and they played for dances and at talent shows. He played in the marching band at the U of U. He also got hired at age 17 to play in the house band at the Rainbow Randevu. They played for all the big-name performers that came through Salt Lake like Nat King Cole and Mel Torme. During the summer, they also played at Saltair and on Monday nights at Lagoon for dancing. After marrying Joyce, they moved to the Bay Area and lived in a few different locations until they settled in San Jose, where they raised their five children. They made many lifelong friends there, many with whom they still keep in touch. They lived there for 30 years then Bob retired from State Farm Insurance and they moved back to Utah in 1997. Bob picked up his trumpet again at the age of 77 and played in the Phoenix Jazz Band in Salt Lake for several years. Bob was a devoted member of the Church of Jesus Christ of Latter-day Saints. He served faithfully as a bishop, on the high council, and in many other callings. He served with his wife in the Zimbabwe, Harare Mission from 2000 to 2002 and in local service missions at the Joseph Smith Memorial Building and the American Fork Employment Center. Bob liked to work in his yard and go on trailer trips. He was known for his humor and quick wit and tried to keep that going to the end. He lived a life of punctuality, reliability, orderliness, and love. He is survived by his wife Joyce and their five children: Stacy Peterson (Ken), Lori Wright, Steven Wright (Julie), Greg Wright (Kami), Kim Wright (Kirk), as well as 17 grandchildren and 13 great-grandchildren. He is also survived by all of his siblings: Melbourne (Merilyn deceased), Carol (Les Palfreyman deceased), Dennis (Edy), and Ann (Bill Erickson deceased). The family wishes to express our deepest appreciation to the Lindon 15th Ward for their loving care and attentiveness to both mom and dad, particularly in dad’s later years; to the Encompass Hospice Team who were professional, loving, and helpful; and to the caregivers at the Covington Village Assisted Living in Orem where dad lived the last few months of his life. Zoom Link for funeral services https://varian.zoom.us/j/99861403647?pwd=Q0E2cnJHakZPbTlBRFhTemN3ZzFaUT09

Robert Francis Wright 1931 - 2020 Robert Francis Wright passed away at the age of 88 in Lindon, Utah on August 3, 2020. He suffered from multiple ailments including dementia and melanoma. He was born on Oct. 18, 1931 in Ogden, Utah to Melbourne... View Obituary & Service Information

The family of Robert Francis Wright created this Life Tributes page to make it easy to share your memories.