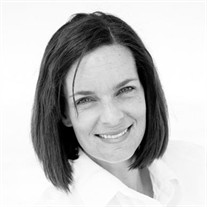 Roberta Elizabeth Loosli passed away Saturday, May 13, 2017 after a year-long battle with breast cancer. She was born and raised in Clovis, California and moved to Utah in her late teens. She met and married Peter Loosli. They moved to Colorado for two years before moving back to Utah. Bobbi worked at Fox Hollow Elementary as head secretary in a job she absolutely loved. She touched so many lives and made a huge impact on those she was around. She loved working with the kids, teachers, administration and mostly the other secretaries in the office. She was a tireless worker, always staying late, as well as bringing work home to stay caught up on all the office duties. Bobbi loved campfires and hated camping. She especially enjoyed weekly, sometimes two or three, campfires at her father-in-law’s home watching all the nieces and nephews play. She loved spending time with family. She had also worked for years as a training manager with Jamba Juice in both Utah and Colorado. She enjoyed the busy schedule and loved training new team members. Everywhere she went and in all aspects of her life she was a joy to be around. She was an uplifting and kind person. She was the first person to jump in and help and the last person to ask for help. She was overwhelmed by the community support in her fight against cancer. Bobbi is survived by Peter (husband), Sydney (daughter), Mckay (son), Robert (father), Lois (mother), Darryl (brother), Marti (sister), Devin (brother), Stephen (brother), and David (brother). A viewing will be held Friday, May 19th, 6 – 8 pm at their LDS Chapel, 6592 Haven Maple Dr. West Jordan, UT. Funeral services will be held Saturday, May 20th, 11:00 am at the same location. She will be interred at West Jordan Cemetery on 1300 W. 7800 So. West Jordan, UT.

Roberta Elizabeth Loosli passed away Saturday, May 13, 2017 after a year-long battle with breast cancer. She was born and raised in Clovis, California and moved to Utah in her late teens. She met and married Peter Loosli. They moved to Colorado... View Obituary & Service Information

The family of Roberta Elizabeth Loosli created this Life Tributes page to make it easy to share your memories.

Roberta Elizabeth Loosli passed away Saturday, May 13, 2017 after...