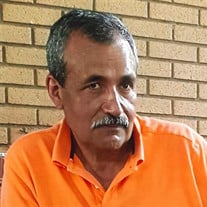 Roberto Reyes passed away peacefully at his home surrounded by his loving family on January 25, 2018 in West Valley City, Utah. Born in Michoacan, Mexico on July 13, 1957, Roberto was the second child of Vicente Reyes and Clemencia Lepes. Roberto spent over thirty years as a blow mold mechanic and was known to his peers as a problem solver and a leader. He was passionate about his work and consistently inspired those that worked alongside him. Outside of work, Roberto was devoted to the outdoors. He loved hunting, fishing, and camping. He would share this passion with everyone close to him by inviting his loved ones and teaching them new skills and providing guidance along the way. Roberto also loved working in his gardens. He spent his summers gardening and making homemade salsa with his wife and would share them with family and friends every year. Married to his loving wife Naomi of 22 years, Roberto was a prime example of the ideal family man. He took great pride in the children they raised together, especially in his only granddaughter Bella. Roberto was the viable source of strength to his family and everyone around him. He led by example by accomplishing everything he set his mind to. Like any true visionary, Roberto created the world he wanted to live in. There was no problem he couldn’t find a solution for. He was capable of taking what was in front of him and making it better in many ways such as repairing vehicles, mastering his own handcrafted bullets, to creating the “best buddies cantina bar” in his basement with his son Michael. Roberto’s happiest moments were spent hosting summer barbecues with family and friends in his backyard exchanging stories and lighting up the room with his addictive laugh — the one we will hear every time we think of him. Roberto is survived by his loving wife Naomi, daughters Veronica (Daniel), and Natalie (Julio), sons Michael (Esther) and Matthew, granddaughter Bella, father Vicente, siblings Ofelia (Ramon), Audel (Lillian), Maria (Arturo), Adan (Irma), Sacramento, Melchor, Gaspar, Clemente, and best friend Jose. The Reyes family would like to thank Inspiration Home Health & Hospice for the wonderful care they provided to Roberto and his family. A visitation will be held on Wednesday, January 31, 2018 from 5:00 p.m. to 7:00 p.m. at St. Therese Catholic Church located at 7832 N Allen St, Midvale, Utah. The funeral mass will be held on Thursday, February 1, 2018 from 10:00 a.m. to 11:00 am at St. Therese Catholic Church and will be immediately followed by the burial at Valley View Memorial Park located at 4335 W 4100 S, West Valley City, Utah.

Roberto Reyes passed away peacefully at his home surrounded by his loving family on January 25, 2018 in West Valley City, Utah. Born in Michoacan, Mexico on July 13, 1957, Roberto was the second child of Vicente Reyes and Clemencia Lepes. Roberto... View Obituary & Service Information

The family of Roberto Reyes created this Life Tributes page to make it easy to share your memories.

Roberto Reyes passed away peacefully at his home surrounded by...