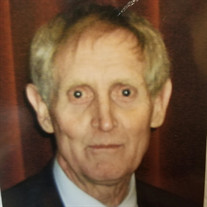 Rodger Evan Larsen, age 77, passed away on Monday, November 20, 2017, in the George Whalen Veteran’s Nursing Home. He suffered from Dementia for about 14 years. He was born in Cleveland, Utah, delivered by his Father at home on February 27, 1940. He grew up on a farm with 11 brothers and sisters and often talked about how much he loved and missed it. Rodger served a L.D.S mission to the Northern States Mission. He attended Weber State University and received a Bachelors of Physical Education, and served in the Honor Guard in the US army. He was the Camp Ranger for the Boy Scouts of America at Camp Tracy in Millcreek Canyon for 36 years where he raised his family and enjoyed living in the mountains. Rodger loved the outdoors and enjoyed hiking, camping, fishing, hunting and adventure. He was kind and had a great sense of humor. He had an uncanny ability to connect with children, especially his grandchildren and he truly lived life to the fullest through simple pleasures, and happiness. He is survived by his wife, Sidney; sons, Chad (Jeri), Josh (Katie), Chris, and daughter JoAnn (Tanner); 10 grandchildren: Molly, Rachel, Ben, Antoinette, Riken, Marty, Parley, Jackie, Genevieve, and Sierra. A viewing will be held on Friday, November 24, 2017 from 6:00-8:00 pm. At the L.D.S. church: 200 North 200 West Bountiful, Utah 84010 The graveside service will be held at the Cleveland Utah Cemetery at 12:00 pm. Saturday, November 25th.

Rodger Evan Larsen, age 77, passed away on Monday, November 20, 2017, in the George Whalen Veteran&#8217;s Nursing Home. He suffered from Dementia for about 14 years. He was born in Cleveland, Utah, delivered by his Father at home on February... View Obituary & Service Information

The family of Rodger Evan Larsen created this Life Tributes page to make it easy to share your memories.