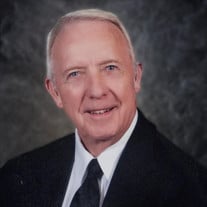 GLINES —Roger Claire, 86, left this world to be with our Lord, Monday, May 30, 2022, at his home surrounded by loved ones in his last days. Roger was born on February 20, 1936 in Los Angeles, California. He was the 3rd of 5 children born to Alden and Zelma Glines. He was preceded in death by his parents, his first wife Sarah Ann Blackhurst, two brothers, Jerry and Rick, a sister, Dawn Thurston and a son, Curtis Glines. He is survived by: His loving wife, Waltena (Tena) and 7 children, Karen Judd of Fruit Heights, Russell Glines of Kaysville, Larry Cornwall of Huntington, Oregon, Shelia Rapp of West Valley, Steven Cornwall of Tulsa, Oklahoma, Rosalie Black of Moses Lake Washington, Marilee Lessley of Farmington and a sister LouAnna Caldwell of West Plains, Missouri. All together they have 21 grandchildren and 11, soon to be 12, great-grandchildren. Roger attended Columbia High School, in Richland, Washington. He and his friends loved sports, in 1952 their Richland First Ward Basketball team won the Stake, Regional, and All Church Tournament. Upon graduating in 1954, he then enlisted in the Army, serving two years in the Korean Conflict. During his service he was stationed in Japan, where he fell in love with the culture and the people. Upon his discharge, Roger enrolled at BYU to study Business. However his love for Baseball played an important part in his College days. He held the position short stop. Roger married Sarah Ann Blackhurst on 19 November 1959 . They were married for 27 years before she passed away from cancer. He Graduated with his degree in Accounting from BYU on June 2, 1961. They moved to Los Angeles to work for a firm, which he really did not enjoy due to traffic and missing family in Utah. Upon returning to Utah he worked for The Church of Jesus Christ of Latter Day Saints as an auditor. He traveled all over, auditing with this position and would be gone from home for weeks and months at a time, missing his wife and children. He was wanting a career that would allow him to be home more. In 1978 He started working for the Davis School District as the Business Administrator and was responsible for coordinating the multimillion dollar budget. He did this for 18 years. In 1996 while vacationing in Europe with his siblings and their spouses he fell in love with traveling the world, came home and turned in his resignation. In December 1996 he was attending a Singles Family Home Evening and met Tena. When asked how he met Tena he would respond quickly “At a Bar” then Tena would explain it was the refreshment bar at the singles event. They knew each other and dated for almost a year then married November 7, 1997. They were married for 24 1/2 years. They did a lot of traveling to several countries and have many wonderful memories. He Also enjoyed woodworking and building things after he and Tena Married. Any project she would ask him to do he would say I can’t do that, but after sleeping on it, the next day, he would rough out a sketch and build it. Roger was such a tease to everyone he met. He started driving the School Bus just for the experience. He had the Special Needs Bus Route. Those children were so fun for him and he for them, he loved the kids. One little boy on the bus called Roger “Bus Boy” and gave him a ball cap with that title embroidered on it. He wore it proudly. In 2002 he was a Bus Driver for the Salt Lake City Olympic Winter Games. Roger loved people and people loved him. His laugh was contagious. He adored his grandchildren and great grands. Babies and toddlers were fond of him and gravitated to his kind sweet love to them. Roger will be missed by many, but the memories of his gentle and kind ways will carry them through those difficult times. Funeral Services will be held at The Church of Jesus Christ of Latter Day Saints, West Bountiful Stake Center, 1930 North 600 West, West Bountiful, Utah on June 6, with the viewing at 10:30-11:45 a.m. and services starting at 12:00 noon. Interment at Kaysville City Cemetery following the service.

The family of Roger Claire Glines created this Life Tributes page to make it easy to share your memories.