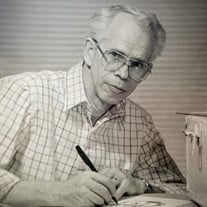 Roger Glen Meyers Our beloved husband, father, grandfather, and great grandfather, Roger Glen Meyers, passed away peacefully at the age of 89 on January 23, 2021 in Kaysville, Utah with his wife, Mildred Louise Musser, at his side. A small family viewing was held on January 26, 2021. He will be buried in another private family service on February 3, 2021 at Larkin Mortuary in Sandy, Utah. Glen was born on May 20, 1931 in Murray, Utah to Harold Edwin Meyers and Louie LaVesta de St. Jeor. He served in the United States Army during the Korean War as a private 1st class in the airborne and was tasked with photographing and documenting aspects of the war. Later in the Summer of 1955 he married the love of his life, Mildred Louise Musser, in the Logan, Utah temple. Upon his passing they had been married for 65 wonderful years. During their marriage they brought 9 beautiful children into this world. He graduated from Brooks Institute with a degree in photography and has inspired many to follow this same passion. Upon graduating he was offered an amazing job from National Geographic but turned it down because he would have been away from his family and young children for far too long. He was a family man and truly cared about being present and available to those he loved. While his children were growing up, he spent a lot of time as a scout master for the Boy Scouts of America. There are fond memories of boy’s camp, merit badges, and simply having fun playing games. A memory that meant a lot to one of his children was teaching him how to tie different knots. At the time it seemed so simple, but as the years went on, he found himself always reminded of his father every time he needed and tie something. A majority of his career was spent in the upholstery business and he taught many of his children how to work with their hands. There are many fond memories of him helping his children with projects at a moment’s notice and his children working alongside him in the garage. Glen also helped many of his grandchildren with projects and even reupholstered a rocking chair for his great grand babies. He was a wonderful father and grandfather, and always took the time to help, serve, and teach. One lesson that has impacted us is when one of his sons was working alongside him at the Stratford shop and he asked, “is this good enough”. His reply, “if you need to ask me that then it’s not. Go back and work a bit more”. He was a man of dedication and hard work and taught us that there is always room for improvement. Glen spent 35 years of his life serving in the Salt Lake temple. He was a dedicated member of The Church of Jesus Christ of Latter-Day Saints and had a strong testimony of the Lord Jesus Christ. A memory that was shared of his faith was one late night, one of his children came home to find the house empty, but around the conner he saw his father kneeling in prayer, and he heard him talking about his feelings and concerns for the well-being of his family. Glen truly cared for his family. His relationship with the Lord was personal and important. His wise counsel for finding the Savior was to turn within. He once said, “look for the Savior within you, he's not somewhere out there, somewhere away from us, He's right here within our hearts. Our dad, grandfather, was an anchor of faith, humility, and he embodied the pure love of Christ within himself. Later in life he began to paint. He would buy old frames from the Distribution Center and paint something on the back of Masonite to give it texture. His paintings were usually beautiful landscapes or portraits. He loved to create. He was also known to make intricate birdhouses and miniature carousels. Always taking the time to make them perfect, unique, and full of color. Glen was a faithful servant of the Lord, a craftsman, gentleman, but he was also funny. He was the kind of person who would laugh at your jokes even if they weren't funny, pretend to gobble up the grandkids fingers while you sat on his lap, and always made you feel important. We will never forget the influence he had on all of our lives. He taught all of us how to find our way home to our Heavenly Father. He was a man a great faith and had the quiet strength to persevere through hard things. We will miss you terribly, but with the legacy and faith you have left behind, we hope to someday join you in the heavens above. Until we meet again. Glen is survived by his wife, Mildred, 2 stepsisters, 9 children, 34 grandchildren, and 49 great grandchildren. He was preceded in death by his parents, grandparents, and his brother, John.

Roger Glen Meyers Our beloved husband, father, grandfather, and great grandfather, Roger Glen Meyers, passed away peacefully at the age of 89 on January 23, 2021 in Kaysville, Utah with his wife, Mildred Louise Musser, at his side. A small... View Obituary & Service Information

The family of Roger Glen Meyers created this Life Tributes page to make it easy to share your memories.