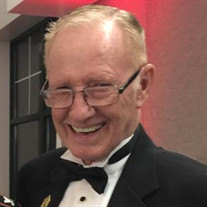 Rolland “Chuck” Wilber April 4, 1945 – May 10, 2022 Roland C. Wilber, passed away at the VA Hospital in SLC Utah on May 10, 2022, at the age of 77. "Rollie" was born April 4, 1945 in Brookings, SD to Rebecca and Leon Wilber and was the third of four children: Mary, Cathy and Art. "Chuck" joined the United States Marine Corps at the age of 17 and proudly served his Country during the Vietnam War. Throughout his military career, he served in the positions of: Infantry Unit Leader, Ammunition Technician and Drill Instructor. He earned a Combat Action Ribbon, Navy Unit Commendation, Navy Achievement Medal, Vietnam Service Medal, Republic of Vietnam Campaign Medal, Vietnamese Cross of Gallantry, National Defense Service Medal, Armed Forces Expeditionary Medal and a Meritorious Mast acknowledgement. After 20 years of dedicated service Chuck retired with the rank of a Gunnery Sergeant in 1983. Although retired, the title of a Marine is an earned title and it never goes away. Once someone goes through the trials and tribulations, it stays with them forever and cannot be taken away. Chuck was forever proud of the time he spent serving in the Marines and we are forever grateful for the sacrifices that he made for his Country. Chuck was an avid lover of woodworking and always had some type of project in the works. He prized his time spent camping and fishing all over the Intermountain West. Following the passing of his loving wife Mary, he shared the remainder of his days with his grandchildren Kenneth and Becca Brecke, his great-grandchildren Kailey and Boston, his faithful companion Buddy, extended family and many friends from the Club 48. Chuck is survived by his sons: Jeff and Chad Wilber of Salt Lake City. Preceded in death by his loving wife Mary Henrietta Boyle-Wilber, mother Rebecca Adamson , Step-Father Glen Adamson and sister Cathy. A Viewing will be held at 1:00 p.m. on Friday, May 20, 2022 at Premier Funeral Service 67 E. 8000 S., Midvale, UT 84047 followed by a graveside service and interment at 2:00 p.m., at the Midvale City Cemetery 471 W. 6th Ave., Midvale City, UT. 84047. In lieu of flowers, donations may be made to the Wounded Warrior Project or Vietnam Veterans of America. Semper Fidelis.

The family of Rolland "Chuck" Wilber created this Life Tributes page to make it easy to share your memories.