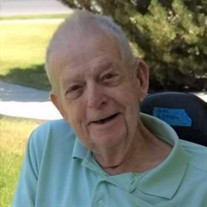 TWIN FALLS - Ronald (Ron) William Crippen, 82, of Roy, UT passed away Thursday, June 28, 2018 in Ogden, UT. Ron was born February 17, 1936 in Sibley, IA to William Gilbert and Anna Marie Crippen. He married the love of his life, Marilyn, in Ontario, CA in 1957. After relocating to Twin Falls, ID Ron worked numerous jobs while serving in the Army Reserves for approximately 10 years starting in the late 1950s. He then worked for 10 years at Garrett Freightlines. Later, he owned and operated a Yamaha Motorcycle Dealership with his brother, Larry and then went on to own the Crippen Co with his father, Bill. After retirement Ron & Marilyn became camp hosts working in campgrounds from Florida to California and North to Idaho while living the winter months in Yuma, AZ. They finally settled in Roy, UT. Ron was a beloved husband, father, uncle, and grandfather. He delighted all with his many stories, his charm, and sweet personality. He always made new friends and like to compliment people wherever he went. Ron is survived by his wife of almost 61 years, his daughter, Kathy Lofthouse (Brady) and grandchildren Nick Lofthouse and Sarah Espinoza (Anthony), and his son, Steve and grandson Travis, his niece Erin Crippen (Earl) and family, his nephew Ryan Crippen (Clem) and grandnephews, William & Addision. He is preceded in death by his two infant children, his brother Larry, and his parents, Bill & Anne. Graveside services will be held at 10:30 am, July 6, 2018 at the Twin Falls Cemetery. We will have a celebration of life at Maxie’s Pizza on Blue Lakes Blvd in Twin Falls immediately after the service.

The family of Ronald W Crippen created this Life Tributes page to make it easy to share your memories.