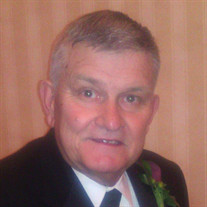 Ronald Glendon Dodge passed away on Tuesday, December 21, 2021. He was born on September 4, 1949 and was the first child of his parents Ronald Bernard Dodge and June Marie Busse. He graduated from South High School where he met and maintained lifetime friends. He also graduated from BYU with a degree in Business and Psychology. He married Carolyn Jones and had two children: Cassie (Montano) and Justin; he and Carolyn later divorced. Ron started his career as a community advocate in Salt Lake County and then spent the rest of his career (40 years) in the real estate business. It is not a surprise to his children that he loved people; he could and would talk to anyone and helped others feel valued and at ease. Ron loved all sports and both Cassie and Justin loved him taking them to play tennis, shooting, driving range, etc; anyone that knew him in his younger days knew that he was an amazing dancer. It was during the prime time of his real estate career when he was a top producer, that he was injured playing tennis; that injury led to bone spurs in his vertebrae growing into his spinal column. The result was a partial and worsening paralysis on one side of his body and significant pain for decades of his life. It was many years before medical technology was at a level that Ron felt comfortable having surgery to stop the progression of the injury. Since that surgery, he has suffered numerous falls and other medical complications that further affected his mobility. As early as late August of 2021, he was completely bedridden after another fall and passed away due to the complications of a recent stroke. Justin and Cassie, as well so many others, loved him in life and are excited for his body to be pain free and made whole. He is survived by his brother Stanley Dodge, son Justin Dodge, daughter Cassie Dodge Montano, son-in-law Brian Montano, and grandchildren CaBri, Jaren, Kaden, & Jaycie Montano. Funeral services will be held at 12 noon, Tuesday, December 28, 2021 at Premier Funeral Services, 67 East 8000 South, Midvale, Utah with a viewing to begin at 11:00 am. Interment to follow at Lake Hills Memorial Park, 10055 South State Street, Sandy, Utah.

Ronald Glendon Dodge passed away on Tuesday, December 21, 2021. He was born on September 4, 1949 and was the first child of his parents Ronald Bernard Dodge and June Marie Busse. He graduated from South High School where he met and maintained... View Obituary & Service Information

The family of Ronald Glendon Dodge created this Life Tributes page to make it easy to share your memories.