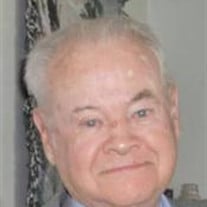 Ron Fullmer, beloved husband, father, grandfather, brother and friend, as well as long-standing civic leader, age 78, passed away Saturday, January 19, 2013 surrounded by his family after a long and valiantly fought battle with illness. He was born October 30, 1934 in Salt Lake City to Arvil and Maud Miller Fullmer. He graduated from East High School, obtained an undergraduate degree from the University of Utah and a Masters degree in Public Administration from BYU. He served in the U.S. Army as a Military Policeman in the 1950’s including being stationed in Germany and guarding president Eisenhower, and was honorably discharged after his service. He served as a police officer for both Salt Lake City and Ogden. He taught Law Enforcement classes at BYU and Salt Lake Community College. Ron served two terms in the Utah State House of Representatives from 1983 through 1986. He loved his association with Cottonwood Heights, was very involved in the incorporation of the city and personally helped to create the annual Butlerville days celebration on the 24th of July. He still attended council meetings as often as his health would permit. Ron loved sports and was a true Ute fan and almost always wore red. He married Janet Ann Burton in Salt Lake on December 30, 1960 they have been happily married for 52 years. Ron is survived by his wife Janet Ann, three sons Kent, Burton (Jill) and Spencer (Amy), four grandchildren Tyler, Tianna, Marii, and Michael and great granddaughter, Lillian. Funeral services will be Friday, January 25, 2013 at Noon in the Butler 18th Ward chapel 6634 S.Greenfield Way (1920 E) where friends may also call Thursday evening for the viewing from 6:00 to 8:00PM or Friday morning at 10:30AM prior to the funeral. Interment will be at Mountain View Memorial Estates 3115 E. 7800 S. The family would like to express thanks to the staff at Wasatch Dialysis for their love and care for Ron for the past years as well as the many people who helped provide care for him including Care Source Hospice for their gentle care in his last hours in this life. We also express gratitude to the members of his ward who have been so kind in their service to our family. He loved the Lord, loved his family and served his community, this State and his Country. HE WILL BE DEEPLY MISSED!!!!

The family of Ronald K Fullmer created this Life Tributes page to make it easy to share your memories.