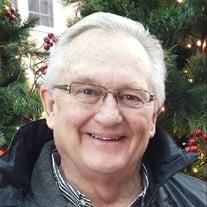 Praise God for the life of Ronald L. Hausauer! Ron was born on February 8, 1944 in Ortonville, Minnesota and died January 25, 2019 at his home in Pleasant Grove, Utah. Ron was raised in a small town in Minnesota surrounded by generations of Hausauers. He attended public school where one building housed Kindergarten through 12th grade classes. In Ron’s senior year of high school he was awarded the “Minnesota Allstate Athlete” Award in Football, Basketball and Baseball. Ron was following in his father’s footsteps – his Dad had received this award 20 years earlier! Ron’s first love was baseball and in 1964 was drafted to play semi pro baseball for the Minnesota Twins. Ron graduated from Concordia College, Moorhead Minnesota, where he met his future wife Kathie Torvik. They were married in Santa Barbara, CA. and moved to Fremont, CA where they both began their teaching careers with Milpitas Unified School District. Ron earned his Masters in Education from St Cloud State University and taught junior and senior high school science, health and physical Education. He coached football and basketball and was head baseball coach at Milpitas High School for 17 years. Ron and his family, now including a daughter, moved to Utah where they have lived since 1985. Ron worked in independent sales for a variety of companies including Outback Flashlights, Sprint, A Viking Feast, and Serg Nelson Insurance Agency. Ron worshipped at Redemption Hill Church, Saratoga Springs, where he was an active participant in church life. He looked at each day of his life as “the day the Lord had made, and rejoiced and was glad in it.” Ps 118:24. Ron lived by Psalm 9:1-2: “I will praise You, O Lord, with my whole heart; I will tell of all your marvelous works. I will be glad and rejoice in You, I will sing praise to Your name, O most High.” Ron was a lifter of people’s spirits and touched the lives and hearts of people of all ages. Ron is survived by Kathie, his wife of 52 years, and his daughter, Kaija. “Precious in the sight of the Lord is the death of His saints.” Ps 116:15 A Celebration of Ron’s life will be held on February 9, 2019 at Fellowship Bible Church 375 N State Street, Lindon, Utah at 1:30 pm. Premierfuneral.com

Praise God for the life of Ronald L. Hausauer! Ron was born on February 8, 1944 in Ortonville, Minnesota and died January 25, 2019 at his home in Pleasant Grove, Utah. Ron was raised in a small town in Minnesota surrounded by generations... View Obituary & Service Information

The family of Ronald L Hausauer created this Life Tributes page to make it easy to share your memories.

Praise God for the life of
Ronald L. Hausauer!