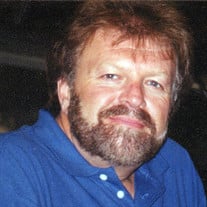 Ronald Glenn McBride 1953-2019 Ron (Moose) passed away May 7, 2019, at his home in Murray, Utah, after a battle with Lymphoma. He was born April 4, 1953, the 1st child of DeLanna Pollard (Dee McBride) and Glenn McBride. Services will be held Saturday, May 18, 2019, at Murray 15th Ward: 5555 South 700 West, Murray, Utah. Viewing at 9:00 am, service at 11:00 am. Graveside service immediately following at Elysian Gardens: 1075 East 4580 South, Salt Lake City, Utah. Ron is survived by his mother, Dee, daughter Kymber, granddaughter Eisley, brother Lloyd (Margaret), sister Tammy, stepmom Roma, nieces Amber, Brittany, Courtney and Jennifer, and 9 great-nieces and nephews; preceded in death by his dad, daughter Krystle and brother Don. Ron attended high school in Lebanon, Tennessee, at Castle Heights Military Academy. He loved his school and throughout his life continued to be a champion of its history and potential future. His unfulfilled dream was to restore “his” school to glory as it closed many years ago and fell into disrepair. After Castle Heights, he obtained an Associate’s Degree at Volunteer State Community College in Nashville, Tennessee. Suited to his outgoing personality, his career was spent in sales. He had a love and passion for music (avid concert goer), movies, vehicles (cars - especially his 1964 “Eldo”, hearses and a Greyhound bus). His interest in music was varied, but all who knew him were aware that at the top of the list was The Beatles. And, as all who love The Beatles typically pick one…his was Paul McCartney. Other heroes for Ron were John Wayne and his dad who he lost as a young boy. His dad gave him the nickname Moose, which stuck with him throughout his life. Politically, he was a strong supporter of President Donald Trump, or as Ron called him “The Trumpster.” Movies were a huge pastime for him and he frequently quoted lines from his favorite movies or TV shows. He was an avid Star Wars fan (not the newest ones, he felt those were @#$%). Although he saw all the new releases, he was a big fan of all the old black and white movies and the stars from those eras. He loved food and would frequently recall meals or experiences from an eating experience that occurred years prior. Anyone that had an opportunity to eat with him at a restaurant will have many humorous comments to share. Ron didn’t read a lot, but he was a big fan of the books and movies of Nicholas Sparks and especially author Richard Paul Evans. He felt honored to call Richard a friend and had recently joined “Tribe of Kyngs” and was looking forward to that continued brotherhood of comradery, service and personal growth. His “girls”, daughter Kymber and granddaughter Eisley, were the highlights of his life. They meant the world to him and any time he got to spend with them were treasured moments. Ron, or Moose as family all called him, had a very outgoing, fun, filter-less, engaging personality. He would talk with everyone and made it a point to engage with the neighbors whether on his walks or out in the front yard waving (full hand or peace symbol). Although in the end he was a much smaller version of himself, he will still always be our larger than life Moose that we all loved greatly and will miss deeply. Party on Moose……. If interested, a GoFundMe account has been established to help with funeral expenses. https://www.gofundme.com/ron-mcbrides-funeral-expenses

Ronald Glenn McBride 1953-2019 Ron (Moose) passed away May 7, 2019, at his home in Murray, Utah, after a battle with Lymphoma. He was born April 4, 1953, the 1st child of DeLanna Pollard (Dee McBride) and Glenn McBride. Services will be held... View Obituary & Service Information

The family of Ronald Glenn McBride created this Life Tributes page to make it easy to share your memories.