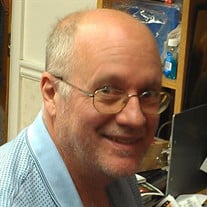 Ron passed away at home in Murray, Utah after a dauntless fight with Amyloidosis, which eventually took over his mortal body. Thankfully, he was able to spend one last Christmas with his family. Ron was described as intelligent, humorous, and loving. He served in the LDS church for many years, earned his Eagle Scout award, and served an honorable, full time mission in Madrid, Spain. He loved to laugh and considered April 1st to be one of the best days of the year. Ron loved to stop at garage sales and developed an eye for finding valuables at them. He also loved politics and would be found discussing his views with almost anyone. During his younger years, Ron was a member of the National Honor Society in High School, graduating from Olympus High School in 1974 in the top 5% of graduating seniors in the nation. He loved boating, waterskiing, and hunting with his family while growing up. He worked with his father, uncle and brothers in his father’s painting and decorating business. Later, he ran his own computer business for over twenty years. Ron was a master at playing chess, having placed in the top 10 in many tournaments. He received a first place trophy in the D Class of the Salt Lake Open Chess Club’s Spring Tournament in April of 1978. He was also the State of Utah Quick Chess Champion in 2004. Ron is survived by his wife, Dawn; daughters: Debra (Mike), Jennifer (Josh), and Trisha (Collin); Parents: Ruth and Harold; siblings: Bruce (Margaret), Diane (David), Mark (Jean), Allen (Aimee), and Marilyn (Daniel); and grandchildren: Natalya, Alexandria, Hanna, Genevieve, Parker, Logan, and Andrew. Ron was preceded in death by his grandson, Spencer. The family expresses a special thank you to the paramedics, staff and doctors at the University of Utah Hospital, the Huntsman Cancer Institute, and IMC who helped give us a few more months with Ron. A viewing will be held Tuesday, Dec. 29 from 6-8 pm and Wednesday, Dec. 30 from 12:00-12:45 pm at the LDS chapel located at 6425 S 725 E prior to the funeral. Funeral services will be held Wednesday, Dec. 30 at 1:00 pm at the LDS chapel located at 6425 S 725 E. Interment will follow at Elysian Burial Gardens located at 1075 E 4580 S. In lieu of flowers, please make a donation at any America First Credit Union to the Ronald Messick Memorial Account.

Ron passed away at home in Murray, Utah after a dauntless fight with Amyloidosis, which eventually took over his mortal body. Thankfully, he was able to spend one last Christmas with his family. Ron was described as intelligent, humorous, and... View Obituary & Service Information

The family of Ronald C Messick created this Life Tributes page to make it easy to share your memories.

Ron passed away at home in Murray, Utah after a dauntless fight...