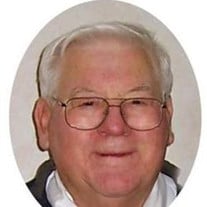 Ronald John Anderson, 84, passed away peacefully on March 27, 2014 at his home in Sandy Utah. He was born in Blackfoot Idaho, August 29, 1929 to Ruby Kingsford and Andrew Anderson. He grew up in Blackfoot and Pocatello with 3 brothers and 3 sisters.   Ron graduated from Pocatello High School . He then graduated from Idaho State University with his Bachelor of Science degree. He was drafted into the Army and proudly served in the Korean war. He obtained his Masters degree at Utah State University.   Ron taught school for over 40 years in Oregon, Pocatello, (ID) and Burlingame and Hillsdale (CA) high schools as a teacher of Life Science and Physical Education. He also coached varsity football and other sports.   He and his first wife Nancy Haynes had three children, Marit , Kirsten and Bobby.   He married Polly Sorensen in 1988 in the Oakland Temple for time and eternity. They have loved and enjoyed each other for 26 years. He lived in Foster City for over 30 years and felt a great attachment to that beautiful city on the bay. He loved to take walks along the dike with Polly and look for shells with the grandkids. He served for many years on the San Mateo Mosquito abatement board representing Foster City.   One of the joys in Ron’s life was the opportunity he had to build his dream cabin in Island Park, ID. He and Polly loved their summers spent at “the cabin”. He enjoyed fly-fishing, golf, dutch oven cooking and visits into nearby Yellowstone National Park with family and friends.   Ron developed a strong testimony of the Gospel and was an active member of the LDS Church where he served in numerous callings throughout his life.   Ron passed away 4 months after moving with Polly to Utah. He is survived by his son Bobby Anderson, and daughters Kirsten Anderson, Marit Leth. Christine (Brad) Baucus, Lindy (Brett) Harte, Susan (Lynn) Green and Carrie (Clint) Greene with 24 grandchildren and 4 great grandchildren, and by his brother, Darwin (Marilyn) Anderson, and sisters Joyce Jensen and Sharon (Bob) Wade.   He is preceded in death by his parents Ruby and Andrew Anderson, Brothers Dennis and Hugh Anderson, and sister Lola.   Funeral services will be held 2:00 pm, Friday, April 4, 2014   at the LDS Stake Center at 2130 East 10,000 South (Gyrfalcon Drive) in Sandy, UT. The viewing will be held from 1:00 – 2:00 . Services conducted by Bishop Lynn Green. Interment will be 2:00 pm, Saturday, April 5, 2014 at the Riverside Thomas Cemetery, 13 South 725 West, Blackfoot Idaho.

Ronald John Anderson, 84, passed away peacefully on March 27, 2014 at his home in Sandy Utah. He was born in Blackfoot Idaho, August 29, 1929 to Ruby Kingsford and Andrew Anderson. He grew up in Blackfoot and Pocatello with 3 brothers and 3... View Obituary & Service Information

The family of Ronald "Ron" John Anderson created this Life Tributes page to make it easy to share your memories.