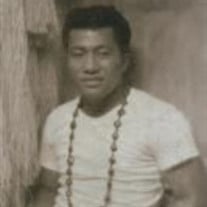 Lesa Lefa’ asisina Ropeti Fa’afetai 1939 - 2020 Lesā Lefa’asisina Ropeti Fa’afetai embarked on his final journey home on Wednesday, March 4, 2020. He was born on December 30, 1939, in Satitoa, Aleipata, Samoa, and lived the most amazing life. He went forth from the tiny shores of his island homeland to get an education, changing the trajectory of his family’s life. After completing a bachelor’s degree at the Church College of Hawaii in 1969, Ropeti returned to American Samoa to raise his family. Over the next 11 years he completed a master’s degree and doctoral of education degree at Brigham Young University. Ropeti spent his career as department chair for the English Department, Education Department, and Athletic Department at the American Samoa Community College (ASCC). He was the Dean of Instruction 3 times and retired as the President of the ASCC. He was responsible for training three generations of elementary and secondary teachers in American Samoa. Ropeti was the author of two books, Being A Boy in Samoa and Ten Saved in Samoa, and founded the Isles of the Sea publishing company. Ropeti is an avid sportsman and an amazing athlete. He was the captain of the Samoa national basketball and volleyball teams and a member of the national rugby team while still in high school. He is known by many titles—athlete, coach, Dr. Lesā, High Chief, Bishop, Bob, Doc, husband, father, grandfather, and more—but his most cherished title of choice is simply Dad to his 12 children. His entire life has been devoted to providing physically, spiritually, and emotionally for his children. He is preceded in death by his son Taseni Sea (Falema’i). He is survived by his wife of 53 years and eternal companion, Phyllis (née Henline), sons Ropeti Jr (Farrah), Peresitene (Joy), Fa’afetai (Josephine), Fa’amanu (Lisa), R. Teiano (Kristen), Ta’aumanaia (LaVerna), Ti’iti’iatalaga (Nathele), W. Sei (Alexis), daughters Erlene (David), Salani (Todd), Maira (Adrian), 54 grandchildren, and 16 great-grandchildren. Dad is a giant of a man in every way, and his presence fills any space he inhabits. That presence was the guiding star for his family while he was on the earth and continues to be so now from the other side of the veil. A public viewing will be held at 10:00 AM on March 10, 2020, with funeral services at 11:00 AM at the Grandview 5th Ward, 1555 North 1350 West, Provo, UT. Interment will follow at the Provo City Cemetery. At Dad’s request, taofi le fa’asamoa.

The family of Ropeti Faafetai Lesa created this Life Tributes page to make it easy to share your memories.