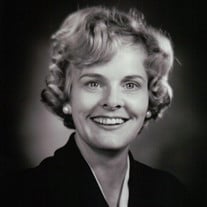 ROSALIE HELENE LEHNER KING 1926 - 2018 Rosalie Helene Lehner King passed away on July 26, 2018, in Provo, Utah, of causes incident to age. She was 91. She was born on August 25, 1926, in Waukegan, Illinois, to Chester Hart Lehner and Virginia Gladys West. As a toddler, she lost both of her parents and she and her Sister Anna were raised in Logan, Utah, by her grandfather Franklin L. West, and her step-grandmother, Violet Madsen West. Rosalie grew up with her aunts Josephine, Marian, and Kathryn, and uncle Frank as siblings. She learned a strong work ethic at a young age that included doing her chores and milking Tiny, the cow. She also took a very strong interest in nursing which led her to join the U.S. Army in 1944 as a nurse cadet. She trained at the University of Utah to be an RN. She took care of wounded soldiers during WWII who had been transferred to the Bushnell General Military Hospital in Brigham City. She married David S. King on March 10th, 1948 in the Salt Lake Temple. She was the mother of eight children, including Jody Olsen, David S. King Jr. (deceased), Elliott W. King (deceased), Franklin L. King (deceased), Stephen E. King (Cathy), Matthew T. King (Laurie), Christine Graham (Douglas), and Christopher H. King (Terry). At the time of her passing, she had 17 grandchildren and 24 great-grandchildren. She is preceded in death by her husband, her parents, sister, and three children. She is survived by five children, and all her grandchildren and great grandchildren. Rosalie was a person with a big personality, a loyal disposition, strong opinions, and very strong faith. She always loved adventure and chose to play life big. She was an enthusiastic lifelong Democrat and supported her husband when he was a U.S. congressman and ambassador. She hosted diplomats and presidents as the wife of the Ambassador in Madagascar and Mauritius. She started and was active in many social and international clubs where she was a very effective leader. She returned to college when her fifties, earning her bachelor’s degree in 1979. As a lifelong member the LDS church, she served in many callings, including Young Women and Relief Society. She became the “Mission Mom” when David presided over the Haiti Port-au-Prince Mission. She used her nursing training to fulfill her personal mission to keep the missionaries in good health. She and David served on the hosting committee for the LDS church in the Washington, D.C. area for many years. She used her hosting and diplomacy skills to be a powerful influence for good. One of her favorite assignments was to decorate the international Christmas trees at the Washington Temple visitor’s center. She collected over a hundred dolls and ornaments from various embassies and other sources which she’d use as part of the display. She served as the matron of the Washington, D.C. Temple for three years, and for many more years served in other positions of leadership in the temple. In all these positions and assignments, she made deep connections with the people she served. She had a very strong spiritual side and those who heard her pray knew her faith was strong. She saw many miracles in her life, including her own recovery from cancer when she was in her 50s. Rosalie’s nursing career continued at the Holy Cross Hospital, in Silver Spring, Maryland. She pioneered a home care hospice program in the 1970s. For many years, she dealt exclusively with dying patients, and was able to give them and their families comfort and love, along with expert nursing care. She worked until she was in her mid-seventies. She was known for hosting wonderful parties, and had a strong sense that her mission in life was to greet people and make sure they were comfortable and well-fed. She regularly invited guests to join the family at her epic Thanksgiving dinners. She was as comfortable working with senior government officials as she was with neighbors, friends, or total strangers. She and David loved to travel and visited dozens of countries. She loved their experiences living in Madagascar and Haiti. Her favorite tours were to China, Israel, the Nordic countries, and Alaska. Her favorite place to go was Hawaii. After David’s passing in 2009, she moved from Kensington, Maryland, to Provo, Utah. She spent the last 7 ½ years of her life at the Courtyard at Jamestown. After her move to Utah, Rosalie became very close friends with Max Leavy. They were very loyal to each other and were often found cuddling on the sofa at Jamestown or going on excursions together. Max and his calming influence on her gave her a strong reason to live and helped extend her life. The family thanks the many care providers at the Courtyard at Jamestown for the tireless ways in which they aided Rosalie, particularly in her final days. The family is relieved that she no longer must deal with a confused mind and a body that hurts. For several years she’s expressed a desire to return to God and be reunited with David. Rosalie leaves this earth with a legacy of joy, love, and faith, having instilled in her children and those around her a desire to heal, comfort, and love those around them. Services will be held at 4:00 pm, Tuesday, August 7th, 2018, at the Edgemont Stake Center, 303 West 3700 North, Provo Utah with a viewing prior to services from 2:30 to 3:40 pm. A private interment service will be held at Parklawn Memorial Park in Rockville, Maryland. An open house for family and friends will be held at 6:00 to 8:00 pm on Wednesday, August 29, 2018, at the home of Jody Olsen.

The family of Rosalie Helene Lehner King created this Life Tributes page to make it easy to share your memories.