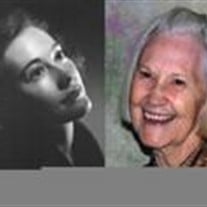 Rosemary Clifford Brown-Hall, aged 92, passed away October 8, 2011, in Salt Lake City, Utah. The daughter of Clifford Ulysses Brown and Florence Albertha Curtis, she was born September 22, 1919, in Eureka, Montana. She grew up under the big skies and on the railroads of Montana, where her father worked. She graduated from Butte High School and married Al Christie. They later divorced. During the next years she lived in Seattle, Washington and Hollywood, California. Of all the various and many things she did in her life she spoke most often of being an airline stewardess. She was also a fashion model and taught ball room dancing. In the early 1950s she moved to Las Vegas, Nevada, and in 1953, married Albert William Hall. Together they raised Arabian horses and Rosemary won ribbons for her riding in horse shows. They divorced in 1962, and Rosemary took on the role of a single mother to her son Kyle. She fostered in her son a love for music and was always so supportive and proud of his accomplishments. One of the highlights of her life was participating in the Singing Mother’s Chorus at LDS General Conference, in the Salt Lake Tabernacle. This event inspired Kyle to one day become a member of the Mormon Tabernacle Choir. Upon retirement, Rosemary returned to Butte, Montana, and lived there for twenty years before moving to Salt Lake City. Rosemary was the perfect example of simple elegance and grace. She is survived by her son Kyle Ross-Hall and his husband, Gary-Lee; one grandson, Kenneth Matthew Hall and 3 great-grandchildren; Marlene Jo Humber Seppi, a beloved niece and natural mother of Kyle; a brother Jack Curtis Brown, his wife Patricia and Harriet Sanner “Sannee” Brown Palmer, her sister. She was preceded in death by her parents, Clifford Ulysses Brown and Florence Albertha Curtis; half-brothers Harry Eugene Brown, Russell Clifford Brown and Ralph Edmond Brown; brother Lawrence Reed Brown and sisters Ella Josephine Humber Wilbur and Florence Gladys Albertha Babcock. Interment is Thursday October 13, 2011, at Monroe City Cemetery, Utah.

Rosemary Clifford Brown-Hall, aged 92, passed away October 8, 2011, in Salt Lake City, Utah. The daughter of Clifford Ulysses Brown and Florence Albertha Curtis, she was born September 22, 1919, in Eureka, Montana. She grew up under the big... View Obituary & Service Information

The family of Rosemary Clifford Brown - Hall created this Life Tributes page to make it easy to share your memories.