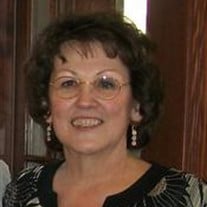 Our dear mother, sister, and friend, Rosemary Ashworh Harward, passed away on October 7, 2012 due to complications from cancer. She was born April 25, 1951 in Payson, Utah to Bill Ray Ashworth and Isabell Norma King. Rosemary grew up in Payson, where she graduated from Payson High School. Rosemary married Rex Young in Oct. 1967 and they were later divorced. "To that union were born four precious blessings whom were the love of her life." She married Elvin Harward on December 5, 2001. At that time six more children and their families were added into her life, each one bringing joy and friendship. Rosemary worked in the banking industry for 25 years where she made numerous friendships. She loved her peers and greatly enjoyed the people she served. She loved being a "mommy and a grandma". Her happiest times were when she was with her family and her grandchildren. She was a master seamstress and enjoyed making quilts for each new grand baby that came along. She enjoyed giving homemade gifts from the heart. Rosemary willingly served in the church throughout her lifetime. Rosemary is survived by her husband, Elvin, her son Allan (Britteny) Young ,Darius Penrod (Pam – deceased), Joe Dutson (Mistie – deceased), 9 grandchildren, a brother David (Lorie) Ashworth, a sister Sharon (Brian) Huntsman, Marie Ashworth her sister-in-law (Ray-deceased), and her step children Elvin L. (Sandy), Lisa (Morgan), Rick (Brenda), Julie (Doug), Mike (Bobbie Jo) and Kathy. She was preceded in death by her father Bill, her mother Isabell, her brothers Ray and Stephen Ashworth, infant son Brett, and daughters Pam and Mistie. Funeral services will be held Saturday Oct. 13, 2012 at 11:00a.m at the Orem North Stake Center, 1000 N Main, Orem. A viewing will be held Friday evening, Oct. 12, 2012 from 6:00 to 8:00 p.m at a different location Timp Park Ward Building at 990 No. 100 W., Orem, Utah. and on (Saturday from 9:30-10:30) at the Stake Center prior to the services. Burial will be in the Payson City Cemetery.

Our dear mother, sister, and friend, Rosemary Ashworh Harward, passed away on October 7, 2012 due to complications from cancer. She was born April 25, 1951 in Payson, Utah to Bill Ray Ashworth and Isabell Norma King. Rosemary grew up in Payson,... View Obituary & Service Information

The family of Rosemary Harward created this Life Tributes page to make it easy to share your memories.