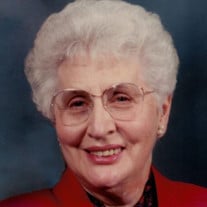 Rosemary Seymour Jones, 91, died November 15, 2018, at the Riverway Memory Care unit in South Jordan, Utah. She was described as a sweet woman who was much loved by all her caregivers there. They reported that she cared for others and shared her strong feelings about the gospel with those she encountered. She was born September 28, 1927 in Sacramento, CA to Elva Estelle and Lewis William Seymour. Her childhood and teen years were spent living in several cities in northern California before moving to Utah to attend Brigham Young University. She worked in the banking industry for many years before she met her husband, J. Dean Jones. They were married in the Salt Lake Temple on September 12, 1951. They settled in Provo, so he could complete his education. After he earned his BA degree, they moved to Spanish Fork, Utah in 1954, where they raised their six children. They later moved to Highland, Utah in 1971. She completed the training necessary to earn an LPN and worked as a nurse for a short time. She was a frequent visitor to the Family History Center, where she loved searching for her ancestors in a close partnership with her sister, Pat. While living in Highland, she cared for her aging mother who suffered with dementia for several years before her death. Then years later, when her husband was diagnosed with Alzheimer’s’ disease, she tenderly cared for him, eventually moving to Salt Lake City to better accommodate his care before his death in 2001. She was an enthusiastic and committed member of The Church of Jesus Christ of Latter-day Saints and served in many positions in every ward in which she was a member. She also served as a temple worker in the Salt Lake Temple for several years after her husband’s death. Her testimony was firm and freely shared with all her family. She loved to watch romantic movies and it was fun to watch her face as she got emotionally involved in the plot. She was an avid reader, and often bought copies of books she enjoyed for her married children to read. She never forgot birthdays for the ever-expanding number of children and grandchildren, and somehow managed for almost all those cards to arrive exactly on their birthdate no matter where in the country they lived. She is survived by her six children: Yvonne (Randy) Buhler, Clearfield, UT; Sylvia (Carl) Chase, Elizabethtown, KY; DeAnn (Lynn) Day, American Fork, UT; Dean (Kiana) Jones, Logan, UT, Kathleen (Gary) Dodds, Riverton, UT; Ellen (Larry) Clubb, Taylorsville, UT; 44 grandchildren, 107 great grandchildren; sisters Emma Lou Poulsen and Loree Perry. She was preceded in death by her parents, her husband, J Dean Jones, her brothers James, William, Robert, and John Seymour, and sisters Lois Martin, Patricia Jones, and granddaughter-in-law, Teri Clubb. Funeral services will be held on Saturday, November 24, 2018 at the American Fork East Stake Center, 831 East 500 North, American Fork, UT. Friends may visit with family that morning prior to the funeral service from 9 – 10:30 AM.

Rosemary Seymour Jones, 91, died November 15, 2018, at the Riverway Memory Care unit in South Jordan, Utah. She was described as a sweet woman who was much loved by all her caregivers there. They reported that she cared for others and shared... View Obituary & Service Information

The family of Rosemary Seymour Jones created this Life Tributes page to make it easy to share your memories.