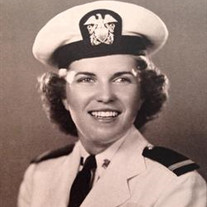 Rosemary Stuka Tepper, died peacefully on May 19, 2015 in Salt Lake City, Utah, after a lengthy battle with Alzheimer's. Rosemary was born September 3, 1922, in Janesville, Wisconsin, the daughter of John and Anna K. Stuka. Rosemary was a world traveler, enjoyed golfing, cross country skiing, swimming, gardening, cooking, reading, and knitting. She was a sustaining member with the Junior League of Salt Lake City. She was also active with P.E.O, Chapter R. and a member of Willow Creek Country Club, where she participated in ladies’ golf. She was a former member of ZONTA International. She served on the Women’s Board for Westminster College. Rosemary graduated from St. Patrick’s Catholic School in Janesville, Wisconsin in 1940. In 1943, she graduated from Mercy Hospital School of Nursing in Janesville. From 1943­1947, she served in World War II as a member of the Navy Nurse Corp. During this time period she met Captain Warren R. Tepper, M.D. in the Panama Canal Zone. They married March 27, 1947. They had two children, Susan A. Tepper and Marcy E. Tepper. While raising their children, she worked part time at the Veterans Administration Hospital in Salt Lake City. Rosemary received her Bachelor’s in Sociology from University of Utah in 1968. In 1972, she pursued and received a Master's degree from University of Utah Graduate School of Social Work. She worked as a Psychiatric Social Worker at University of Utah Hospital. She retired in December 1989. Rosemary is survived by her brother Carl J. Stuka of Janesville, Wisconsin. Her daughter Susan A. Tepper of Salt Lake City, Utah and Marcy E. Tepper of Lander, Wyoming. She has three grandchildren, Melissa B. Shafer of Tucson, Arizona, Scott T. Shafer of Kearney, Nebraska and John W. Oakden of Tucson, Arizona. She also has one great grandchild, Zia C. Shafer of Kearney, Nebraska. The family wishes to thank all of those who cared for her during her illness. She is having a private family burial. A celebration of her life will be held September 3, 2015 at Three Fountains in Murray, Utah at 1 p.m. For more information, contact her daughter Marcy Tepper at [email protected]

The family of Rosemary Stuka Tepper created this Life Tributes page to make it easy to share your memories.