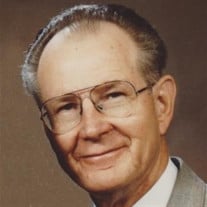 Ross Elliott Bergener 01/05/1925 - 09/05/2017 Our loving husband, father, and grandfather passed away peacefully Tuesday night on September 5, 2017 after a long battle with Alzheimer’s. He was born on January 5, 1925 in Logan, Utah to William Nephi and Clara Emma Anderson Bergener. He enlisted in the Navy and served for 3 years as a Pharmacist’s Mate in the Pacific during World War II. After returning home, he continued his studies at the University of Utah, graduating in 1949. He married Doris Nelson on May 27, 1948 in the Salt Lake Temple. He worked as a chemist for Harshaw Filtrol Corporation for 34 years. He spent his life serving his family, his Heavenly Father and his fellow men. He was active in the Church of Jesus Christ of Latter-day Saints all of his life. He served in various callings including Bishop of the Crescent 1st Ward, High Council and as a Stake Patriarch. He worked as an ordinance worker in the Salt Lake Temple for 21 years. Ross and Doris served a mission together in the Pennsylvania Pittsburgh Mission from 1991 to 1993. His greatest joy was his family. He is survived by his wife, Doris, and their 8 children: Sharon (Ladd) Tanner, Ryan (Marilyn) Bergener, Susan (David) McEwan, Janet (Samuel) Camp, Kathryn Berlin, Ruth Bergener, Paul (Julia) Bergener, David (Hollie) Bergener. He has 27 grandchildren and 32 great grandchildren and 1 great great grandchild. He is preceded in death by his parents and brothers and sisters: Gladys, Elnora, Wilford, Raymond, Helen and Shirley. Funeral services will be held 11:00 am, Friday, September 15, 2017 at the West Jordan Westbrook Stake Center, 4113 West 6200 South, West Jordan, Utah with a viewing from 9:30 – 10:30 a.m. prior to services.

The family of Ross Elliott Bergener created this Life Tributes page to make it easy to share your memories.