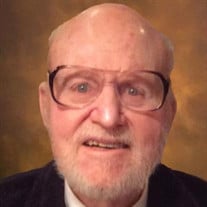 After a full and happy life, Roy Ashby Barrett passed away at the age of 93 at his home, surrounded by his family, on Thursday, November 6, 2020. He was born March 1, 1927, in Salt Lake City to Ashby William and Judith Anderson Barrett. His father died when he was two years old from lingering health problems brought on by the flu epidemic of 1918. Roy and his two siblings were raised by their mother on a farm along the banks of the Jordan River where the kids loved to swim. He graduated from South High. Roy entered World War II as a paratrooper. After, he served a mission for the Church of Jesus Christ of Latter-day Saints in Sweden. He later returned and attended the University of Stockholm for a brief time before finishing his degree in economics from the University of Utah. He met the one and only love of his life, Ruth Redd, at the Rainbow Rendezvous, when they were both on dates with other people. After one traded dance, Roy and Ruth became friends and then a couple. They married in June 1953 in the Salt Lake Temple and embarked on a honeymoon trip in a new car to Canada, the upper United States, and Yellowstone, where they both worked for the season. They lived in Phoenix while Roy was a graduate student at the Thunderbird School of Global Management and then moved to Philadelphia for a job in insurance. It was the first of many moves in their life of adventure. The next stop was Monrovia, Liberia, where Roy worked for the International Trust Co. of Liberia. The couple lived across the street from the Presidential Mansion, attended embassy parties, and enjoyed canoe river trips into the interior of the country. After Blair, their first child, had repeated bouts of malaria they decided to move back to the states after a whirlwind trip through Europe. Back in Utah, their family continued to grow. They added a daughter, Jody, and two more sons, Bill and Sanford. Roy’s work life evolved, too, as he became the entrepreneur he was born to be. The only thing Roy loved as much as his family and his faith, was making a deal. He became a property developer, with projects in Utah, Hawaii, and Nevada. He started a number of companies, selling everything from wigs to horses. He developed the Tutor Time Childcare/Learning Centers, which are still in operation in the United States and Asia today. The family lived in Hawaii for five years, where Roy developed property and became a concert promoter for a short time. They also completed their family with the addition of one more son, Bruce. Next, they moved to Las Vegas, where Roy continued his land deals and started a company that produced films for children. After their children were grown, Roy and Ruth started to write a new chapter in their lives, moving to Florida, where they enjoyed Latin dancing, Christmas in Miami, and work with their church. Ruth’s illness forced them to change plans and the two returned to Utah before Ruth died from ALS in 1998. When Roy began to need some additional care, he was blessed to live with Sanford and Jennifer for a time before making his final move to Blair and Ruth’s home, where their family opened their hearts and lives to Grandpa Roy for almost 20 years. Roy was unfailingly good natured and cheerful, even after losing Ruth. He was rarely bored and never boring and took joy in so many things until the end of his life. He loved his work and could name every one of the dozens of cars he ever owned. He was an avid reader, devouring books about religion, history, business, and Swedish crime novels. He loved to travel, and took trips to Europe late in his life, including a trip to his ancestral homeland in Sweden with some of his grandkids. Roy could strike up a conversation with anyone and particularly enjoyed a vigorous debate. He was famous for his storytelling and followed the motto: “Never let the facts get in the way of a good story.” He loved his family dearly. He was preceded in death by his loving wife Ruth, his parents, his brother David Barrett, and his sister Audrey Rapp. He is survived by Dave’s wife Dorothy, his children, Blair (Ruth), Jody (Weston) Innes, Bill (Arlene), Sanford (Jennifer), Bruce (Melissa), and “adopted” daughter Marie Lansing Heart. He was cherished by his 19 grandchildren and 22 great grandchildren. Due to COVID restrictions, a private funeral service will be held for immediate family only on Saturday, November 14, 2020, at 12:00 p.m. Services will be live streamed on the Premier Funeral Services Facebook Page. Interment will be at Wasatch Lawn Memorial Park, 3401 South Highland Drive, Salt Lake City, Utah. Condolences and memories of Roy can be shared at www.premierfuneral.com and would be welcomed. The family would like to thank the staff of the Salt Lake VA for the kind and excellent care provided throughout Roy’s life and Bristol Hospice for sending angels to assist him over the last few months.

After a full and happy life, Roy Ashby Barrett passed away at the age of 93 at his home, surrounded by his family, on Thursday, November 6, 2020. He was born March 1, 1927, in Salt Lake City to Ashby William and Judith Anderson Barrett. His... View Obituary & Service Information

The family of Roy Ashby Barrett created this Life Tributes page to make it easy to share your memories.

After a full and happy life, Roy Ashby Barrett passed away at...