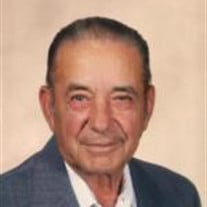 Leroy S Packer Hanson passed from this life on September 29, 2010 after a long battle with cancer. Roy was born January 29, 1916 in Grace, Idaho, to William Walter Packer and Aramenta Elizabeth Sharp. He moved to Goshen and was adopted by Vernon and Alice Hanson after the death of his mother. He lived in Grace, Goshen, Osgood, New Sweden, Idaho Falls, Arizona and Salt Lake City. He attended school in Goshen, Firth and Shelley, Idaho. On December 16, 1937 he was sealed to Thora Murdock in the Salt Lake LDS Temple. They were blessed with 10 children, 44 grandchildren and 110 great grandchildren. They were later divorced. He married Mary Kerr. After Mary’s death he married Pearl Ellsworth (deceased). As a youth he enjoyed boxing which included earning the ‘Featherweight Boxing Championship’ in the Idaho Falls area; wrestling; track; baseball; horses including breaking, riding and cattle drives; and when he could he would go camping and fishing. He learned farming skills and took pride as a youth to be able to do a man’s work. He loved the outdoors. He was an excellent dancer and went to the high school and church dances. He was an Eagle Scout and cherished the outdoors. He loved to sing and yodel and was good at it. After he was married, life on the farm brought much enjoyment. He coached church baseball teams for both girls and boys, his daughters talk about his coaching days. He took many Sunday afternoon drives and picnics with the family which included singing all the way. He loved animals and took good care of all of them. He farmed for many years in Osgood and took great pride in his farm. He started a trucking business and moved his family to the New Sweden area. His love for driving increased with every mile he put on the trucks and passed that love on to his son and daughters. He later traveled the Northwest states selling Linderman Chain to potato farmers. Many of his retirement years were spent in Arizona. He became a craftsman with lapidary (stone work), working his gold mine, storytelling and being a good friend, he was a friend to everyone. When his health declined, he moved to Salt Lake City where he lived with his daughter Ellen and her family. He was the highlight of many family reunions. In the past few years he thoroughly enjoyed attending the Temples. One of the highlights of his life was shaking hands with President Thomas S Monson. He is survived by his Children, Marie (Ron) Elison of Idaho Falls, ID; Alice (Boyd) Misseldine of Brigham City, UT; Roger Hodges (son-in-law) of Idaho Falls, ID; Betty Packer of Las Vegas, NV; Ellen (Gayle) Smith of Salt Lake City, UT; Clara (Ray) Risenmay of Mattawa, WA; Joelene (Sam) Hendricks of Idaho Falls, ID; Karolia Hanson of Salt Lake City, UT; Debbie Freckle (daughter-in-law) of Billings, MT; Lynette Shearer (Andy) de Haan of Rigby, ID. He is preceded in death by parents; wives; children, Donna Hodges and Ross Hanson; son-in-law Paul Shearer, 2 grandchildren and 2 great grandchildren. He touched the lives of many people, and many people have touched his. The family wishes to thank the Care Source Hospice and all those involved in his care, friends and neighbors. Funeral services held Monday October 4, 2010 at 10 a.m. at the Salt Lake Canyon Rim LDS 4th Ward building located at 3051 South 2900 East, Salt Lake City, UT. Visitation with family and friends will be Sunday October 3rd at the .m.Salt Lake Canyon Rim LDS 4th Ward building from 6 p.m. to 8 p.m. and Monday October 4th from 8:45 a.m. to 9:45 a.m. prior to service. Graveside service and burial will be in the Iona Cemetery in Iona, Idaho, Monday October 4th at 4:30 p

Leroy S Packer Hanson passed from this life on September 29, 2010 after a long battle with cancer. Roy was born January 29, 1916 in Grace, Idaho, to William Walter Packer and Aramenta Elizabeth Sharp. He moved to Goshen and was adopted by... View Obituary & Service Information

The family of Roy Hanson created this Life Tributes page to make it easy to share your memories.

Leroy S Packer Hanson passed from this life on September 29,...