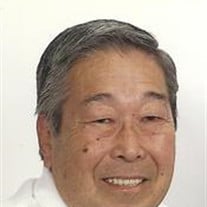 Roy Satoshi Itamura age 75 peacefully passed away surrounded by family on Saturday March 24, 2012 at his home in West Jordan, Utah. Roy is survived by his wife of 44 years Emiko; daughter, Velma; granddaughters, Emiko and Courtney; great granddaughters, Aniyah and Anastasia; brother, Jerry; sisters, Elsie (Tsuji) and Lorraine (Tomita); and several nieces and a nephew. Roy was born on March 11, 1937 in Hilo, Hawaii the son of Shujiro and Sayo. In 1955 he joined the United States Army where he served for 3 years in France and Germany, which led to his lifelong career in electronics repair with Rockwell. While working at Rockwell he served as a civilian consultant to the military, which brought him overseas to several countries including Japan where he met his wife Emiko. After living in Yokosuka, they moved to New Bern, North Carolina where daughter Velma was born and later moved to Yorba Linda, California where they lived for 26 years. In 2001, they moved to West Jordan, Utah to live near newly born granddaughter, Emiko. Roy enjoyed fishing, spending time with his family, completing crossword puzzles and Sudoku, and volunteering at the Salt Lake County Department of Parks and Recreation. Roy will always be remembered for being caring, selfless, and willing to help others in need. Private services will be held.

The family of Roy Itamura created this Life Tributes page to make it easy to share your memories.