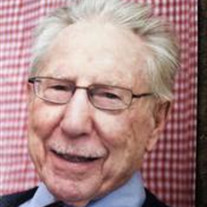 Roy Wheeler Spear, 97, passed away on April 11, 2013, in American Fork, Utah. He was born in Salt Lake City, Utah, on January 9, 1916, and was the eldest of nine children. His father was Roy Ferdinand Spear and his mother was Pearl Ethel Wheeler. He went to elementary school at the Oneiqua School and to Jackson Jr. High School. He graduated from West High School in 1933. He graduated from the University of Utah in 1937 with a BS in Botany and a minor in Biology. He did his practice teaching at West and South High Schools and received a teaching credential along with his diploma. He was on the wrestling team at the University of Utah and won the conference championship at 118 lbs. He went on to beat a wrestler from BYU for the Olympic tryouts in Salt Lake. Shortly after his college graduation, he was called by the LDS church to serve as a missionary in the Japanese Mission in Hawaii. Roy was released from his mission in 1939 and found employment as a school teacher in Manila, Utah. When Pearl Harbor came along, he tried enlisting in the air corps but his poor eyesight kept him out. In 1942 he was inducted into the army and spent the war years at Ft. MacArthur in San Pedro, California. It was at Ft. MacArthur that Roy met Susie Thompson Edwards, a pretty young woman from McComb, Mississippi. They were married in Los Angeles on November 11, 1946, and their union lasted 66 years. Roy worked in the insurance business for most of his career, living in Louisiana for 10 years and then Atlanta, Georgia for 45 years. After some intense study, at the age of 60, Roy became self-employed as an enrolled actuary. He retired at the age of 80. Roy also served for many years as a worker in the Atlanta temple. He felt the need to continue to educate himself throughout his life. He enjoyed reading and traveling. His outlived his beloved wife, Susie Edwards Spear, by 20 days. He is survived by his son Roy Alan Spear and his wife Marty of Bush, Louisiana, his daughter Susan Spear Anthony and her husband Thomas of Provo, Utah, and son Gaylen Spear and his wife Jeanne of Nyssa, Oregon; ten grandchildren, and fourteen great grandchildren, with one on the way. He is also survived by his sisters Barbara Henshaw of St. George, Utah, Iris Smith of Payson, Utah, and Faye Munson of Sandy, Utah, and his brother Carl Spear of Providence, Utah. The family would like to thank the BeeHive Home of American Fork and Carrie and Donna of Encompass Hospice for their tender care of Roy these past few months. A graveside service and interment will take place on April 19, 2013, at the Hollywood Cemetery in McComb, Mississippi.

Roy Wheeler Spear, 97, passed away on April 11, 2013, in American Fork, Utah. He was born in Salt Lake City, Utah, on January 9, 1916, and was the eldest of nine children. His father was Roy Ferdinand Spear and his mother was Pearl Ethel Wheeler.... View Obituary & Service Information

The family of Roy Wheeler Spear created this Life Tributes page to make it easy to share your memories.